Holly Layne, a paraprofessional with Charlotte County Public Schools (CCPS) has been nominated for the RISE award on behalf of Randolph-Henry High School (RHHS).

The Recognizing Inspirational School Employees (RISE) Award is intended to honor and promote school employees who provide exemplary service to students. This new award, passed by Congress in 2019 and overseen by the U.S. Department of Education, seeks to highlight the stories of incredible school employees across the nation to inspire excellence and encourage hope. 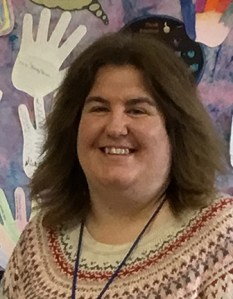 Layne, who said she is not the type that likes to call attention to herself, said it was an honor to represent such an outstanding school as RHHS.

When her oldest son was getting ready to enter kindergarten, Layne went to Phenix Elementary to visit the school.

“Everyone, from the custodians to the principal, greeted us and made us feel like family,” Layne said.

After several years of volunteering in the classroom and substituting, Layne applied for a position with CCPS.

Layne was first hired as a substitute with CCPS in 2005 and then as a full-time paraprofessional in 2009. In 2014 she began working at RHHS as a paraprofessional helping students in all the core subjects.

“Helping others gives me a sense of satisfaction,” Layne said. “I love seeing students that are struggling to have an epiphany.”

“If you have ever worked with Mrs. Layne, then you know she is a woman of kindness, patience and love,” Davis said. “On any given day, you might see Mrs. Layne covering a class, helping with morning attendance, providing special accommodations, assisting with SOL testing or countless other tasks. But one thing is certain, Mrs. Layne is always helping others.”

Students have a love for Layne as well, according to Davis.

“Students love Mrs. Layne because she has a gift for bringing a calm voice to difficult situations,” Davis said. “No task is too big or too small, and no questions are ever treated as insignificant.”

Layne’s love for students does not stop in the classroom. At the school’s After-Prom Party, she can be seen working the money grab machine. At Statesmen Day, she’s often operating the cotton candy machine.

“She is one of the best supporters of instruction a teacher could desire,” Davis said.

RHHS submitted a video nomination for the RISE award. It can be viewed at https://youtu.be/lrhMAOJ2JUM

The U.S. Department of Education is expected to announce the winners of the RISE awards in the spring of 2021.

The Center for Tech and Civic Life, a nonprofit organization, has awarded Charlotte County $20,000 to plan and execute a... read more