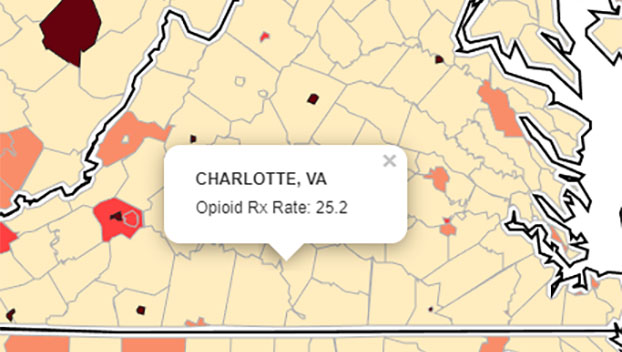 A look at the CDC’s data, showing that in Charlotte County, only 25.2 opioid prescriptions were given out for every 100 people. That’s far below the national average and lower than most other counties in the region.

By Brian Carlton and Crystal Vandegrift

The numbers are dropping and that’s a good thing. As of 2020, the latest data we have, an average of 43.3 opioid prescriptions were given out per each 100 people in the United States. Charlotte County is far below that, coming in at 25.2, according to the Centers for Disease Control (CDC).

That’s also lower than some neighboring counties, as 20.8 opioid prescriptions were given out for every 100 people in Prince Edward County.

“Much of this trend is due to increased caution by many providers in prescribing opiates or any controlled substance,” said Piedmont Health District Director Maria Almond. “Often, the preference now is for primary care providers to refer patients to a specialized pain provider, who balances the prescribing of opiates with other (alternatives).”

In fact, as some other Southside counties find their opioid problem growing, Charlotte is headed in the opposite direction. Now, as money starts coming in from opioid production settlements, it’s going to further help the county clean up.

Now fewer opioid prescriptions is a positive, but it’s just part of the larger picture. While fewer prescriptions helps potentially lower the number of addicts in the future, local officials still have to deal with the existing addicts. Charlotte County is improving in that area as well.

The Virginia Department of Health reports in 2020, the county only saw six deaths linked to opioids. That’s a death rate of 50.8 per every 100,000 residents.

Now the good news is that all of those numbers are in the second-lowest tier in Virginia, highlighting that locally, the problem continues to shrink.

HOW DID THIS HAPPEN?

We talk about opioids, but how did this problem get started? For that, you can blame drug companies. Beginning in the late 1990s, pharmaceutical companies marketed opioids heavily, claiming they were less addictive than regular pain medication. They sponsored medical-education courses, created ads and sent sales representatives to doctors, often giving free samples. As a result, in 2015, U.S. doctors prescribed three times more opioids than they had in 1999, according to the CDC.

In 2007 and 2020, Purdue Pharma pleaded guilty to misleading doctors and the public about how addictive OxyContin was. Company officials admitted that Purdue paid doctors through a speakers program, encouraging them to write more opioid prescriptions. They also admitted to paying a medical records company to send information on patients to doctors as another way to encourage opioid prescriptions.

This fall, Virginia was part of another settlement, this time with opioid manufacturer Janssen Pharmaceuticals, a subsidiary of Johnson & Johnson ( J & J). The $99.3 million deal will see cities and counties receive funds over the next nine years. In addition, Johnson & Johnson agreed to stop selling opioids in the U.S. They also can’t promote opioids as a prescription or fund any other group that either promotes the drugs or legislation linked to them.

WHERE IS THAT MONEY GOING?

Money from that settlement is now being disbursed to the cities and counties across the state. While some of the money must be spent to prevent future damage, most of it comes without strings attached. That’s left it up to local governments to decide where to use it.

Now, to be clear, we’re not talking about millions of dollars here. Charlotte County received $33,974.62 from the settlement.

“To date, the County has received $33,974.62 in settlement funds,” said Dan Witt, Charlotte County Administrator. “We’ve not spent any of the funds, but are looking at options that include but are not limited to the Community Services Board, a Drug Court, and DSS.”