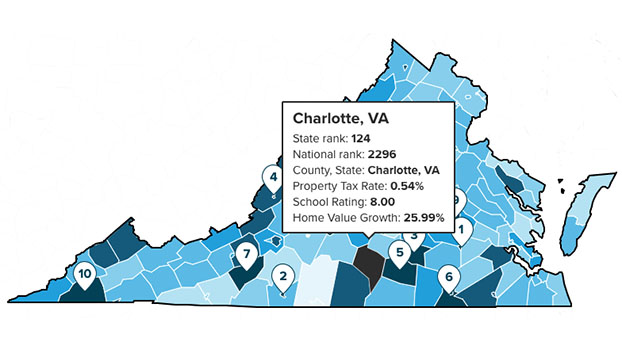 A graphic from SmartAsset shows Charlotte ranks number 125 when it comes to home value growth however the school system ranks eight out of ten.

CHARLOTTE COUNTY – A new study from financial technology company SmartAsset listed Charlotte County in a much lower tier of homes that have risen in value the most in a five-year period when compared to surrounding counties.

According to the study, Charlotte County home values rose by 25.99% over the past five years, ranking them number 125 in Virginia when it comes to growth rates. The home value rankings are one factor in a three-part study on the places receiving the most value for their property taxes.

Neighboring Lunenburg County ranked number five with the most home value rate growth at just over 80%. Another neighboring county, Prince Edward, ranked 54 with a growth rate of 35%.

A look at the ranking system

According to a press release from SmartAsset, the study aims to find the places in the United States where people are getting the most value for their property tax dollars. To do this, they looked at property taxes paid, school rankings and the change in property values throughout a five-year period.

“First, we used the number of households, median home value and average property tax rate to calculate a per capita property tax amount that is collected for each county,” the press releases stated. “As a way to measure the quality of schools, we analyzed the math and reading/language arts proficiencies for every school district in the country. We created an average score for each district by looking at the scores for every school in that district, weighting it to account for the number of students in each school. Within each state, we assigned every county a score between 1 and 10 (with 10 being the best) based on the average scores of the districts in each county.

According to SmartAsset, Charlotte County Public Schools received a score of eight for its school division. For comparison, Lunenburg Schools ranked three while Prince Edward Schools ranked a low score of one.

Second, SmartAsset calculated each county’s property tax value change throughout a five-year period. Places, where property values rose by the most significant amount indicated where consumers were motivated to buy homes and a positive return on investment for homeowners in the community.

Lastly, the study calculated a property tax index based. Counties with the highest scores were those where property tax dollars were going the furthest.

When it came to the county property tax rate SmartAssest listed it at 0.54%.