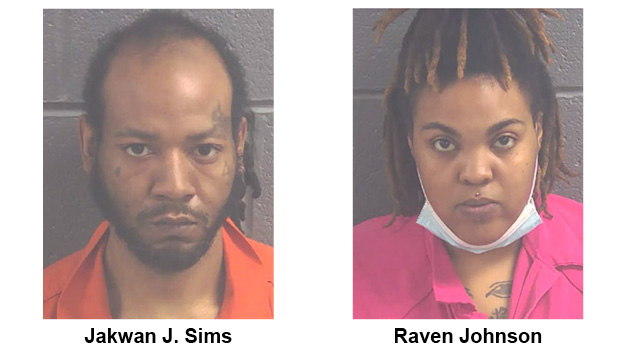 Jakwan J. Sims, age 30, of Keysville and Raven Johnson, age 28, of Crewe were arrested on Feb. 2, for the Jan. 30, shooting of a vehicle on East Third Street in the Town of Farmville.

According to Farmville Police at 3:41 a.m. Sunday, Farmville Police received a report of an occupied vehicle being struck by gunfire on East Third Street near Milnwood Road. The suspect fired from another vehicle, described as a dark colored Chrysler with temporary tags. No injuries were reported.

Sims was charged with five felonies related to the incident: Attempted malicious wounding (two counts); use of a firearm in the commission of an attempted malicious wounding (two counts); and maliciously shooting at an occupied motor vehicle. He was also served with outstanding warrants from Amherst, Charlotte, Nottoway, Powhatan and Prince Edward counties. Sims is currently being held without bond at Piedmont Regional Jail.

Johnson was charged with the same five offenses related to the shooting incident as a principal in the second degree. She is also currently being held at Piedmont Regional Jail in lieu of a $7,500 bond.

Citizens may also use the Farmville Police Department’s anonymous Tip411 application. Tip411 is available as a free download from both Goolge’s Play store and the Apple App Store by simply searching “Farmville PD Tip411.” It is also available on the website at www.farmvilleva.com. You can also text a tip to 847411, but you must begin your message with the key word “FarmvillePD.