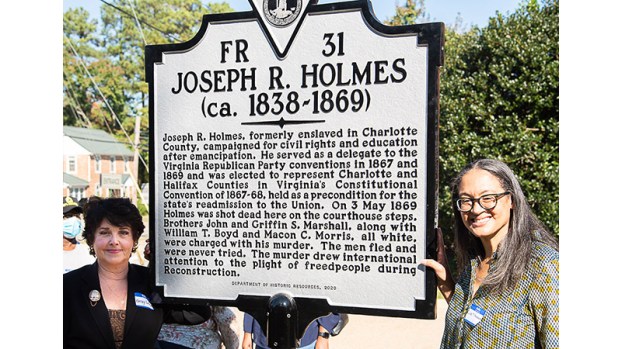 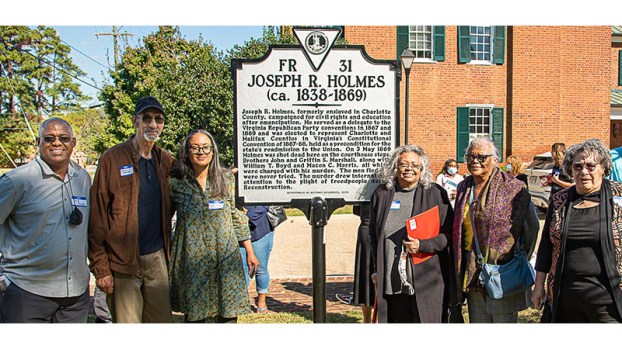 In Charlotte Court House, on Saturday, Oct. 23, 154 years to the day that Joseph R. Holmes became the first African-American man in Charlotte County to win an election, a historical marker was unveiled in the courthouse square.

The marker, which took more than a year to be placed following its approval by the Virginia Board of Historic Resources, informs the public about the life of Joseph R. Holmes who was born enslaved.

After emancipation, he served as a delegate to the Virginia Republican Party conventions in 1867 and 1869 and was elected to represent Charlotte and Halifax counties in Virginia’s Constitutional Convention of 1867-68.

On May 3, 1869, four white men assassinated Holmes on the county’s courthouse steps. The men charged with his murder were never tried.

The placement of the historical marker was spearheaded by Kathy Liston who recently published the history and murder of Holmes.

According to Liston, because of his outspoken support of civil rights and education for freed people, he was murdered on the courthouse steps in Charlotte County.

During the unveiling event, Liston spoke of Holmes and his accomplishments.

“Joseph R. Holmes should not be defined by his murder, He was so much more than that,” Liston said. “I did this for Joe Holmes, not for praise, but I am very proud to have been the force behind it.”

In addition to Liston, Lisa Henderson, great great grandniece of Holmes, spoke about his legacy and what this recognition meant to his family.

Joseph R. Holmes, formerly enslaved in Charlotte County, campaigned for civil rights and education after emancipation. He served as a delegate to the Virginia Republican Party conventions in 1867 and 1869 and was elected to represent Charlotte and Halifax counties in Virginia’s Constitutional Convention of 1867-68, held as a precondition for the state’s readmission to the Union. On 3 May 1869, Holmes was shot dead here on the courthouse steps. Brothers John and Griffin S. Marshall, along with William T. Boyd and Macon C. Morris, all white, were charged with his murder. The men fled and were never tried. The murder drew international attention to the plight of freed people during Reconstruction.

The marker come with a $1,945 price tag in which donations were made to cover using no county funds.

Virginia’s historical highway marker program, which began in 1927 with the installation of the first markers along U.S. 1, is considered the oldest such program in the nation. Currently there are more than 2,600 state markers, most of which are maintained by the Virginia Department of Transportation, except in those localities outside of VDOT’s authority.

Refreshments were provided by the Farmville Alumnae Chapter of Delta Sigma Theta Sorority, Inc. and the culinary arts students from Randolph-Henry High School.