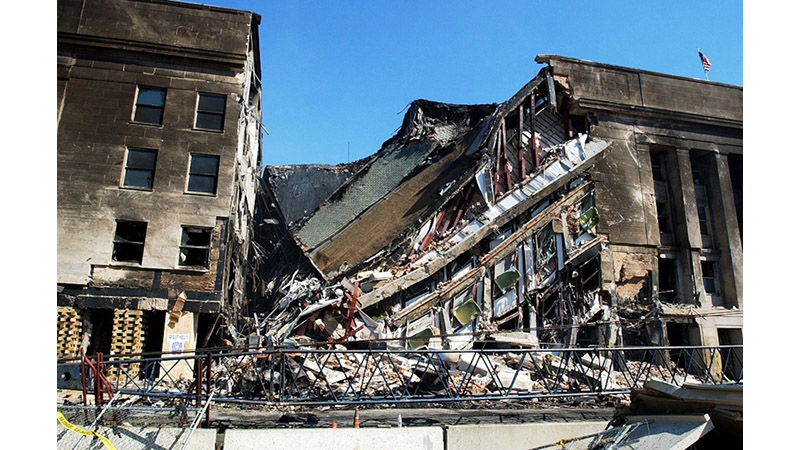 A section of the Pentagon lies in ruins following the deadly terrorist attacks in which hijacked American Airlines Flight 77 crashed into the Pentagon on Sept. 11, 2001. The attack killed all 58 passengers and six crew members on the flight and 125 people in the Pentagon.

Saturday, Sept. 11 will mark the passage of two decades since the day that changed many lives forever and the world as we know it.

Some are too young to remember the events that unfolded on Sept. 11, 2001, some are no longer with us and some will carry that memory and horror of that fall day with them forever.

Retired U.S. Air Force Colonel and current Charlotte County Board of Supervisor member Donna Fore recalls the events of that fateful day and is left wondering why she survived the attacks when many of her co-workers didn’t.

Less than 35 minutes into the flight, hijackers stormed the cockpit and forced the passengers, crew, and pilots to the rear of the aircraft.

At 9:37 a.m., Sept. 11, 2001, terrorists flew American Airlines Flight 77 into the west side of the building, killing all 58 passengers and six crew members on the flight and 125 people in the Pentagon.

‘I thought it was a bomb,” said Fore who was stationed at the Pentagon. “It felt like a minor earthquake and pushed me back in my seat.”

Fore who was working on the Air Force Intelligence headquarters Staff was located on the fourth Floor, A Ring, ninth Corridor.

Fore said the plane struck on the other side of the courtyard from where her office was.

“It was not unusual for me to be on that side of the building in an office where the plane struck,” Fore said. “I worked quite frequently, almost daily, with the Defense Intelligence Agency’s Budget Office housed in the Pentagon. Every single one of those great people was killed in the attack. I also lost two close friends from my weekly Pentagon Women’s Officer Bible study group who worked for the headquarters Army Personnel Office.

That office took a direct hit from the plane.

“It’s weird to think that you’re just sitting at your desk and in just a blink of an eye you’re gone … Why them and not me,” Fore said.

Fore said on the morning of the attacks she remembered looking up into the sky as she was walking into the Pentagon and thinking it was such a beautiful day but that quickly changed.

According to Fore when the first plane struck the World Trade Center tower she thought like most it was an accident. “We saw the second plane fly into the second tower,” Fore said. “I knew then America was under attack.”

With tears in her eyes and voice trembling Fore recalled how she could see smoke and smell jet fuel when she stepped into the hallway. “That’s when I knew we had been hit by a plane,” she said. “My office was not directly hit, so I got my other co-workers out of the office we worked in and exited out the second-floor parking lot entrance toward Pentagon City.”

Once outside the Pentagon Fore said the rest of the day included trying to get home and let her husband and parents know that she was OK. “I knew they had seen it on T.V. and all the phone lines were down,” Fore said. “I remember making my way to a pay phone and calling my husband to let him know I was all right and for him to tell my parents. That’s something I worried about the whole day is that my parents thought I was dead.”

Fore still remembers stepping into the Pentagon one day after the attack.

“We were told to wear our BDU’s because we were at war,” Fore said. “Almost 24 hours after the attack there were still fires burning inside the building … everything was covered in a black soot. For a least, a month after the attacks there would be ash on my desk I would clean off each day.”

The physical damage to the Pentagon was rebuilt in less than a year.

Fore said the Pentagon’s chapel is now located where the plane struck.

Since 2008, the National 9/11 Pentagon Memorial has been a solemn, quiet escape for mourners to pay their respects to those who died at the Pentagon

Described as elegant and simple, the Pentagon Memorial displays a timeline of the victims’ ages, spanning from the youngest victim, 3-year-old Dana Falkenberg, who was onboard Flight 77, to the eldest, John D. Yamnicky, 71, a Navy veteran, also on the flight that morning.

Each year when the anniversary of 911 comes around Fore said she does her best to stay busy so she does not think about the events of that fateful day but she is also fearful that as years go by people will begin to forget about those who died in the attacks.

“I don’t want people to forget that thousands of lives were lost that day,” Fore said. “On 9/11 I want people to take just a minute out of their day and pray and never forget.”