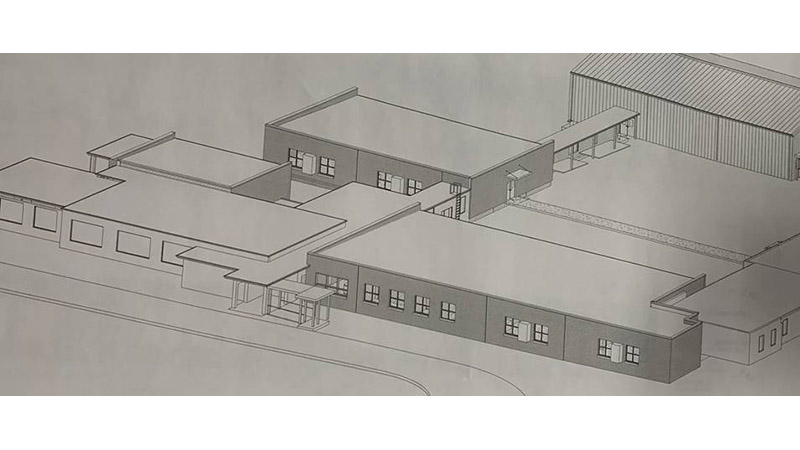 A drawing of the Bacon District Elementary School shows the new additions.

With a new cafeteria and four classrooms close to completion in the coming weeks, the front wing of Bacon District Elementary will begin a transformation.

According to Charlotte County Public Schools (CCPS) Executive Director of Operations Brette Arbogast the front of the school will be demolished making way for a new wing which will include larger, more energy-efficient classrooms.

“So far, this project has gone well.” Arbogast said.

According to Arbogast, it was more economical to demolish and construct a new front entrance of Bacon District rather than renovating the building.

“During the planning phase of this project, we had two main concerns. The existing structure materials and structure of the facility,” Arbogast said. “We could not afford either of these to increase in cost to the county. So, looking at the safest route, we started to discuss actuals that we could control.”

Arbogast said CCPS determined demolishing the structure and building new was cheaper than renovating the facility.

The decision reduced the overall costs of the proposal by $2 million.

“So, you’re getting brand new, instead of renovated, and reducing the overall costs,” he said.

For the 2021-22 school year, there will be a change in the location of the school’s office.

According to Arbogast due to construction, a temporary office will be set up in one of the four new classrooms on the left side of the building.

“While this will be an adjustment for the faculty and staff, everyone is excited about the improvements being made to the school.” Arbogast said.

Over the past several years, CCPS has been undergoing two phases of school renovations.

Phase 1 of the school’s construction project included the addition of classrooms at Phenix Elementary and gymnasiums at both Phenix and Bacon.

Phase 2 is a continuation of renovation projects at both Bacon and Phenix elementary schools.

In November 2019, Project Manager A. Hunter Wilson with OWPR, an architect and engineering firm from Blacksburg, presented a facilities condition assessment report during a joint meeting with the Board of Supervisors and the School Board.