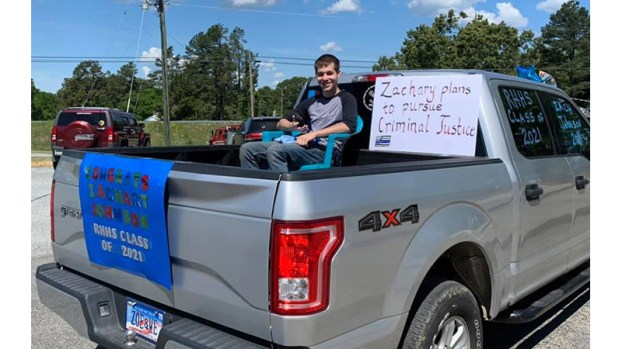 R-H senior Zachary Johnson was all smiles during the senior car parade showing the crowd he plans to pursue a career in criminal justice. 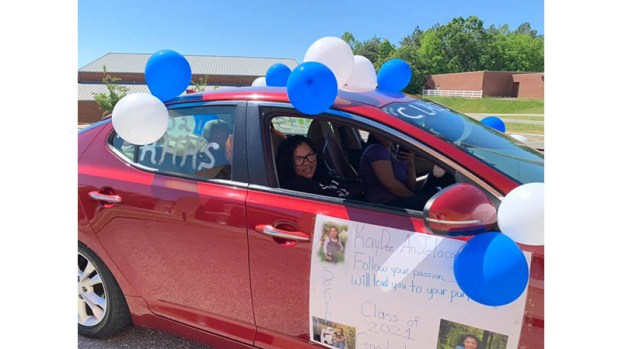 KayDee Roberts showed her school spirit during the Class of 2021 senior car parade.

Friends and parents of the Class of 2021 organized a Senior Car Parade Saturday, May 15, that began at Randolph-Henry High School and ended in Keysville at Southside Virginia Community College (SVCC).

Sixty students took part in the event that featured decorated vehicles and citizens cheering and waving to the seniors as they drove the parade route.

This was the second year of the car parade – an event that was started for the Class of 2020 when parent Wendy Rapole’s daughter Alyssa, a senior at R-H, was disappointed about missing out on graduation and other senior activities since schools have been closed due to COVID-19.

“The Senior Car Parade was a wonderful event for our students this year,” R-H Principal Erin Davis said. “We are thankful for our Statesmen parents who worked so hard to organize the parade, and we certainly enjoyed being a small part of it.”

According to parent Holly Skelton, the Class of 2021 has requested that the parade be held again this year, and the organization is hoping to make the parade an annual event.

“As we made the drive over to SVCC, it was heartwarming to see the community members outside on the sidewalks waving to our students,” Davis said, “We have such a supportive school community here in Charlotte County.”