Pettus remembered for his compassion 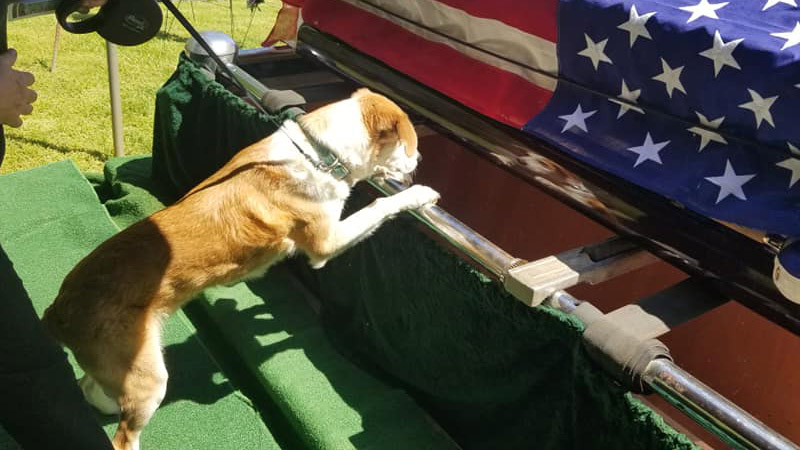 “Sport” says his final goodbyes to his owner Walter Harold Pettus Jr. who died at the age of 92.

The Drakes Branch community is mourning the loss of one of its lifelong residents and former town council members.

Pettus, an Army veteran served on the Drakes Branch Town Council for 28 years until he decided his time was done in 2006.

“Mr. Pettus was great to work with,” Drakes Branch Mayor Denise Pridgen said. “He had a lot of knowledge about the town.”

Pettus’s knowledge of the town, some say, came from the many years he owned a business right down the street from the Town Office, all while being an active member of the volunteer fire department for many years.

Pettus devoted his life to his love of cars, and he worked at the family business, Pettus Motor Company, a Pontiac dealership from childhood in 1947 until the business closed in 1999.

One employee of the dealership, Wanda Hudson, who worked for Pettus for 23 years, said he was an all-around great guy whom customers loved.

Hudson recalled a time when one customer wanted to buy a Ford from Pettus.

“We had people that would want to buy a used Ford from Harold Jr., and of course, we didn’t like Ford, but they want it anyway because they knew he would give them a fair deal,” Hudson said. “So, if we were going to an auction, Harold Jr. would say get your hat. And if he said get your hat, I knew I was going to be driving a Ford back. So when we would come back through Drakes Branch, I would put my sunglasses on, my hat on and bend over as far as I could so no one in Drakes Branch could see us coming with a Ford, but because Harold Jr. was fair to people, he always did what he could.”

One of Pettus’s biggest impacts on Hudson, while she was an employee, came when her mother was terminally ill.

“Harold Jr. always told me that anytime I needed to go home and take care of my mother, I could do that,” Hudson said, “And there were times that I had to leave work and do just that. That really stuck with me. Not many bosses are going to do that.”

Pettus’s compassion stuck with Hudson so much that Hudson has been a caregiver and overseer to Pettus’s round-the-clock home care for the past three years.

“We all loved him,” Hudson said. “And his mind was still sharp till the day he died.”

Hudson recalled just a few weeks ago that Pettus was able to remember a car that was sold to a gentleman back in the 80s.

Pettus also had a love for animals, especially his rescue dog, Sport.

“He loved that dog,” Hudson said. “Every morning, he would break off four corners of a pop tart and feed Sport and then tell us he was not feeding the dog. But we knew he was.”

Hudson said she took Sport, who was accustomed to riding with Pettus, to the funeral home following Pettus’s death.

“I took Sport to see him, and he licked him on the cheek, He knew,” Hudson said.

Before his death, Hudson said Pettus asked her to look after Sport. “He made me promise I would take care of Sport. I promised I would, so Sport is coming home to live with me now.”