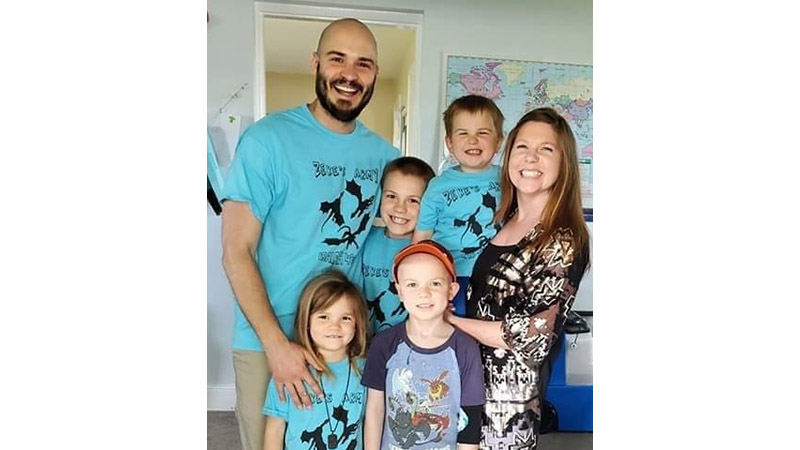 John and Danielle Puig of Phenix have spent the past 11 months living in Pennsylvania as their son undergoes cancer treatment.

Last March, while most were learning a new way of life amid the COVID-19 pandemic, a young Phenix boy was getting ready to begin chemotherapy, leading him and his family on a year-long journey.

A journey that has led a father to give his son the gift of life.

John and Danielle Puig’s 7-year-old son Zeke was diagnosed with a rare form of cancer in February of 2020.

AML is a type of cancer of the blood and bone marrow.

Over the past 11 months, the Puig’s have been living in Pennsylvania while Zeke has undergone rounds of testing, treatments and bone marrow transplants at The Children’s Hospital of Pennsylvania.

According to Danielle Puig, she took Zeke to see his pediatrician in October 2019 after a slew of worsening symptoms and a mama’s gut that strongly said something was wrong.

“After he had his blood tested and time was getting longer and longer before anyone returned, I knew it wasn’t good,” Puig said. “Our sweet and amazing doctor returned, and immediately I knew I was going to hear the words I’d been thinking – leukemia.”

She said they were sent straight to the University of Virginia Hospital, where they spent the next three days thinking their son had leukemia, but following a bone marrow biopsy, they received the diagnosis of severe aplastic anemia (SAA). SAA is a rare bone marrow failure disorder.

Puig said in February of 2020, Zeke had a second bone marrow biopsy at The Children’s Hospital of Pennsylvania, and things changed from there when he was diagnosed with AML.

Zeke was admitted to the hospital March 16, where he began chemotherapy that same day.

Puig said it was hard to have a sick child, and the added stress of COVID-19 was not an easy task.

“We certainly never imagined walking this journey during a pandemic,” Puig said, “It has definitely added a bit more ups and downs. Since day one, when Zeke was admitted for chemo rounds in March, he has not been allowed a single visitor. That means in 2020 alone, he and all of us spent 223 plus days separated from his siblings.”

In September, Puig said Zeke was able to leave the hospital, and the family planned to return to Phenix.

“Once he got out, it was only four or five days of him getting to enjoy semi-normal life before things started to go downhill for him physically,” Puig said.

Zeke ended up back in the hospital, this time receiving T-cells from his dad, John.

Puig said that both she and her husband were tested, and John was the best match for Zeke.

“After a few pre-exams, John went through a 2.5 hour donation process with needles in both arms taking out his powerful T-Cells,” Puig said. “The next day, they were then infused into Zeke. It’s pretty amazing to watch Zeke again receive cells from someone else to continue his battle to restore his health and this time from his dad.”

Puig said through the continued battle, both Zeke and his family have kept their faith in God and remained optimistic that Zeke will be cancer free.

“Learning how to talk to Zeke and lead him through his battle against cancer has not been easy, and we aren’t perfect at this either,” Puig said. “We can already look back and say, ‘Oh, we would do this differently if we were to do this again.’ But as we talk to him, we try, first of all, to focus on one day and the moments he has to endure for that day rather than the long term and remind him he is never alone. This road is tough, don’t get me wrong. Having God sustain us doesn’t mean it has not been without tears and pain for Zeke or us. No parent ever wants to hear the words cancer and have to walk their child through this excruciating journey.”