Some SEC customers could be in the dark until March 1 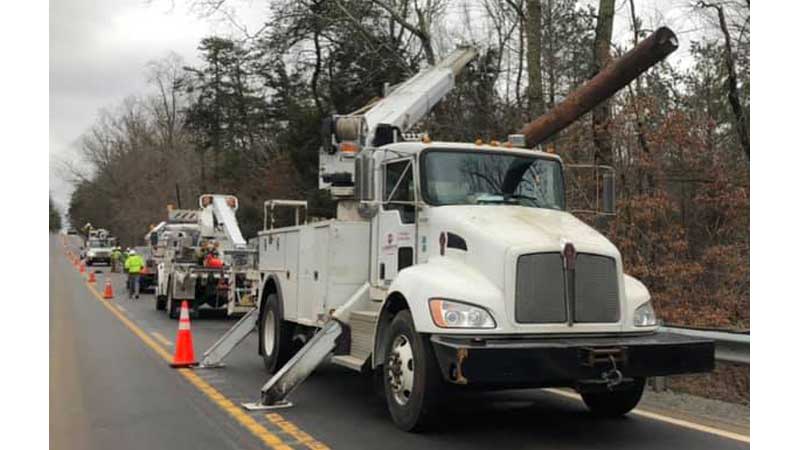 Power crews have been working for several days to restore power to Charlotte County following a weekend ice storm that left 97% of the county in the dark. (Photo courtesy of Gleaning for the World)

Southside Electric Cooperative (SEC) says customers in Charlotte County could be looking at another week before power is fully restored.

Currently, 3,178 SEC customers are without power.

Charlotte County Officials met with SEC Thursday afternoon, Feb. 18, and were told they could expect 90% of their customers to be back on-line by next Thursday, Feb. 25 and power restoration to all customers by Monday, Mar. 1.

SEC officials said additional work to infrastructure would be needed beyond that to fully repair their system.

Crews from other cooperatives in their association had been assisting SEC but left the area Wednesday, Feb. 17, ahead of Thursday’s storm.

Once additional crews arrive, SEC will be at the maximum number of crew members they are able to handle logistically.

Over the past week, SEC has been receiving backlash over what many say is a slow response to restoring power to Charlotte County.

SEC said that they were one of the few companies, if not the only one, that had pre-staged crews for this weather event, according to SEC Community Relations Coordinator Lloyd Lenhart.

However, the damage to their service area was extensive. The wet ground is causing some delays for them as they have to use track vehicles to install poles and a backhoe, and other heavy equipment to pull some of their trucks out of the mud.

SEC is expected to have another meeting with county officials today, Friday, Feb. 19