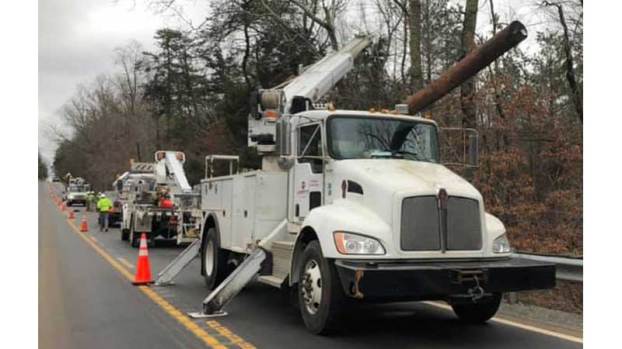 Power crews have been working for several days to restore power to Charlotte County following a weekend ice storm that left 97% of the county in the dark. (Photo courtesy of Gleaning for the World) 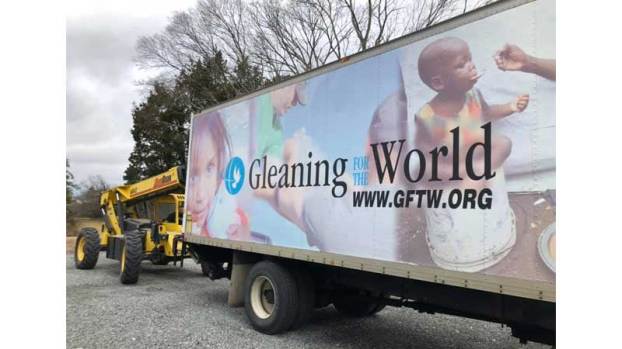 Gleaning for the World dropped off water, food and blankets on Tuesday, Feb. 16, in Charlotte Court House to be distributed to citizens. 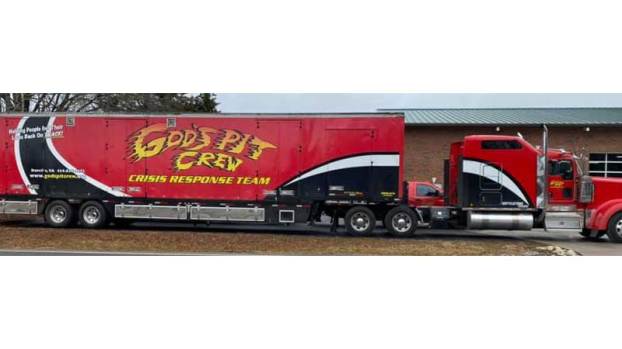 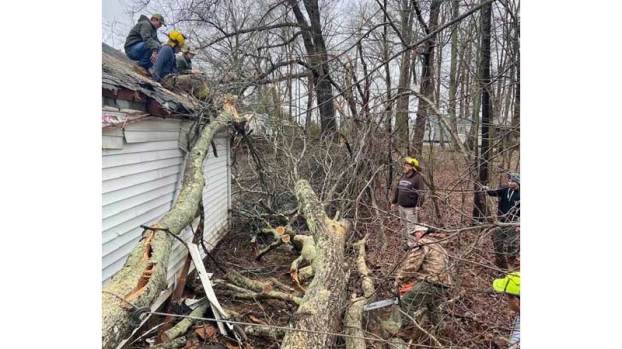 A community in action — Walt Bailey, president of the Charlotte County Fire and Rescue Association, posted a need for help on his Facebook page Tuesday, Feb. 16, seeking help to repair a roof due to a fallen tree. The tree had fallen on an elderly woman’s home, leaving a hole in the roof, exposing her home to rainfall and cold temperatures. Within hours volunteers showed up to clear debris and repair the roof.

Thousands in Charlotte County were left in the dark after ice coated trees and power lines snapped throughout Southside Virginia following a weekend winter storm.

On Monday, Feb. 15, while 5,000 Charlotte County residents dealt with power outages, county officials and local fire departments were working to help those in need.

The Department of Social Services, Virginia Department of Emergency Management, the American Red Cross, God’s Pit Crew and Gleaning for the World were all utilized.

Each of the county’s seven fire departments received food, water and blankets for citizens while the departments served as warming and charging stations.

Area electric companies are expected to have a portion of the county’s power restored early in the week, but Bailey said with the number of fallen trees and power lines he has seen, he feels it could be longer. Citizens may continue to need assistance later into the week and possibly the weekend.

On Monday, Bailey said close to 60 citizens had come into the Phenix Fire Department to pick up food, water, blankets, get warm, take showers, or simply charge mobile devices.

Other departments around the county were seeing citizens utilize services as well.

Bailey said some departments were going door to door, checking on citizens and making house calls to those in need.

“We had one individual that called the rescue squad and wanted to go to the hospital because he said he was freezing,” Bailey said. “We brought him here to the department and got him warm and fed.”

Gwendolyn Pillow, who was going on day three without power on Tuesday morning, Feb. 16, said she has only a small gas log fireplace in her dining room to heat the whole house.

“It’s cold, but I’m snuggled up in bed to stay warm,” Pillow said. “I ventured out Monday and grabbed breakfast at Robbie’s Service Center. He has a generator and hot coffee and hot bacon and egg sandwiches, which were delicious. I’m reading a lot. My Bible has been my comfort during this storm and power outage.”

Red House Fire Chief Chad Reeves said his department has had several citizens come by to pick up food and water, but most of his firefighters have been out helping cut trees and clear debris as well as answer other emergency calls. “I think we’ve had over 30 calls in the past few days,” Reeves said.

God’s Pit Crew, a Danville-based relief organization, dispatched its immediate response team to the county with 12 pallets of water and will help in the coming weeks by clearing fallen trees and removing debris.

Gleaning for the World based in Concord delivered blankets, Gatorade, protein shakes and water to the area on Tuesday morning, Feb. 15.

In addition to community organizations, many businesses and churches in the county have also responded to the need for help.

Anita’s Homestyle Cooking in Drakes Branch gave out free meals to citizens on Monday while the Village Drive Inn in Charlotte Court House was providing free meals to fire, EMS and linemen.

King Street Church in Keysville distributed food boxes while other churches like Tabernacle Baptist Church in Drakes Branch opened their doors to provide warmth, Wi-Fi and a place to cook a meal.

Just as the community is recovering, the area is preparing for another round of winter precipitation expected to hit on Wednesday evening into Thursday.