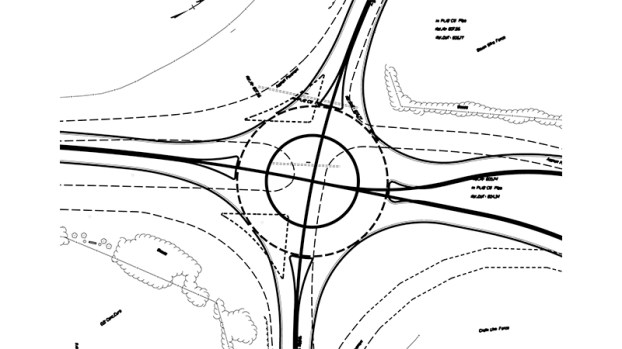 The updated redesign of the Routes 15 and U.S. 360 roundabout proposed for Keysville will be considered by the board of supervisors at its Dec. 14 meeting.

The Charlotte County Board of Supervisors (BOS) are expected to consider approving a change to the Routes 15 and U.S. 360 roundabout proposed for Keysville during its Monday, Dec. 14 meeting.

Following a VDOT virtual public hearing on Nov. 12 to hear comments and concerns, a safety issue was brought into question that led VDOT engineers to redesign a portion of the roundabout.

“The primary issue was addressing a safety concern by eliminating a high-speed conflict point by removing the Route 15 southbound ramp onto 360 westbound,” VDOT Communications Manager Paula K. Jones said. “That traffic would access 360 westbound by the Route 15 northbound ramp.”

According to County Administrator Dan Witt, VDOT has sketched a roundabout redesign utilizing the existing budget and right-of-way.

Witt said the new design directs vehicle traffic traveling on Route 15 South into the roundabout, then take the first exit to head west on Route 360.

Supervisor Kay Pierantoni, who attended the virtual public hearing, brought the issue to light. “The main issue I have is that I believe the most critical problem in that area is not presently being addressed,” she said. “Traveling from Richmond on the dual lane 360 West, there are one exit and two entrance ramps onto 360. The second entrance ramp is the very concerning one. Traffic from the roundabout wishing to enter 360 West will use this ramp. It is a short ramp with no acceleration lane.

The ramp ends just within feet of the railroad overpass. On the right of the ramp are a bank and guardrail. If both lanes on 360 West have vehicles and the vehicle exiting the ramp is not using extreme caution, I believe the potential for an extremely serious accident is there.”

In 2017 the proposed $5.2 million roundabout at the intersection of Routes 15 and U.S. 360 made it through the second round of scoring under the new SMART SCALE prioritization process used by the state’s Commonwealth Transportation Board (CTB).

According to transportation documents, the current intersection has a major road (two-way, not divided) as well as an off-ramp and an entrance leading to an off-ramp all connecting at a three approach stop-sign intersection that is in a grade curve,” county leaders said in the application to state transportation officials. “Sight-distance, as well as traffic flow currently contributes to driver error. This project will replace the stop-sign intersection with a roundabout to allow for a more fluid entrance and exit to the off-ramps as well as take the sight-distance issue out of the equation. This project will create a safer intersection. The Charlotte County Industrial Park is along the route of this project, and the Heartland Business Park is adjacent to the project area.”

VDOT said due to safety concerns and accident history, this project will improve the intersection with a roundabout concept.

The Red House Volunteer Fire Department’s Chief Chad Reeves is being hailed as a hero after pulling two people out... read more