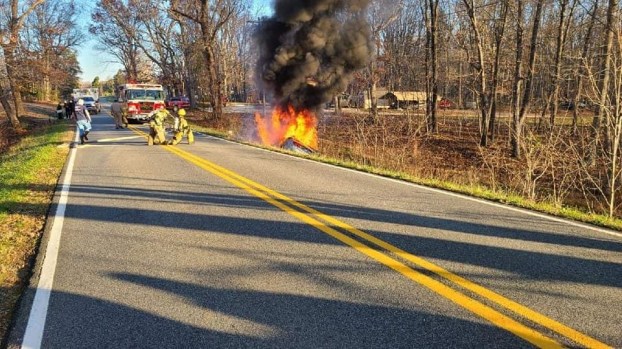 The Red House Volunteer Fire Department’s Chief Chad Reeves is being hailed as a hero after pulling two people out of a burning car last weekend.

But Reeves insists he’s not a hero.

“I was just doing what people should do,” he said.

Reeves, who is employed by the Lynchburg Fire Department, had finished his shift and was on his way home Sunday morning, Dec. 6, when traveling through Appomattox County along route 727 towards Red House.

“I met a car coming towards me and noticed smoke and fire coming from it,” Reeves said, “I turned around to go and try to catch up with them and when I came over a knoll on the road in the vicinity of Richwood Estates Road the driver had started to go off the right side of the road and over the embankment.”

Reeves said he made it to the car while calling 911.

“By the time I got to them, the engine compartment was on fire,” he said.

Reeves said the driver of the car was trapped, but he managed to pull her out and carry her up the hill away from the fire.

“At that time, she starts telling me to get her husband,” he said. “It was so much smoke that I could not see and just had to feel around inside the car.”

Reeves said the man was trapped inside the burning car by his seatbelt but that he could feel around to get the belt unhooked, finding the car door handle and pulled the man to safety.

Being a firefighter, Reeves has rescued people from burning buildings before but never from a fully involved car fire without any protective clothing.

“It was quite an interesting morning coming home from work … sometimes things happen that you don’t expect, but there was nothing left to do but help them.”

Reeves said he received a call from family members later Sunday afternoon letting him know the two people he saved were home and doing fine.

Dasher in running for top dog

From rescue dog to champion dog, Dasher, a Border Collie that lives and works on his owner’s farm in Charlotte... read more