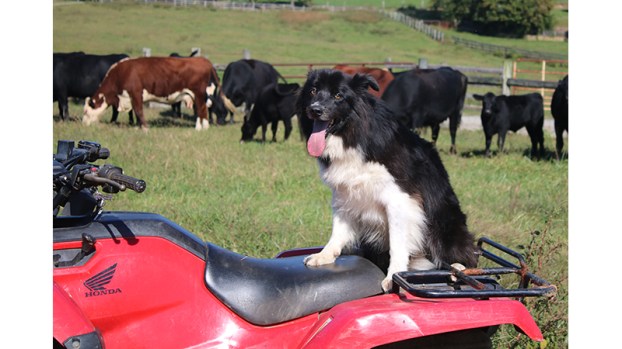 Dasher a Border Collie, owned by Sandy Riepe of Charlotte Court House, is one of 10 dogs in the nation in the running for the 2021 Farm Dog of the Year People’s Choice Pup Award.

Dasher in running for top dog

From rescue dog to champion dog, Dasher, a Border Collie that lives and works on his owner’s farm in Charlotte Court House, is in the running for the 2021 Farm Dog of the Year Award to People’s Choice Pup sponsored by Purina and Farm Bureau.

Dasher is one of 10 dogs across the country competing for the top dog award.

Dasher’s owner Sandy Riepe said he has evolved from a hard-to-place rescue canine to an agility champion and working farm dog.

“My first meeting was not that great with him,” Riepe said. “He growled and jumped on me … He had a lot of energy, and he really needed a job.”

Riepe said Dasher is still energetic at 11 years old and that farm life is perfect for him. Dasher helps herd cattle on Riepe’s farm, and without any formal herding training, his strong instincts help get cattle where they need to go.

“What he does is natural. There have been times when the calves got out and were in a briar patch,” Riepe said. “He and the other border collie went in, got the calves out, and brought them back through the gate and back into the pasture.”

According to Riepe, when he’s not working, Dasher competes in agility trials and has won multiple awards, including a PACH (Preferred Agility Champion).

Dasher also brings happiness to his family in addition to his working skills, Riepe said.

“He has taught me so much about developing good relationships with animals and even people,” Riepe said. “You can accomplish so much more by being happy, positive and playful.

Being a rescue dog, Dasher was a challenge at first and it is exciting to see how far he has come.”

The public is encouraged to vote for their favorite farm dog on social media by Dec. 18 to select the People’s Choice Pup. Likes on dogs’ photos will be counted as votes. The winner will be announced during the American Farm Bureau virtual convention in January.

To see photos of the dogs and vote, visit facebook.com/AmericanFarmBureau.

No injuries were reported following a Thanksgiving night car fire on Morris Church Road in Brookneal. According to Red House... read more