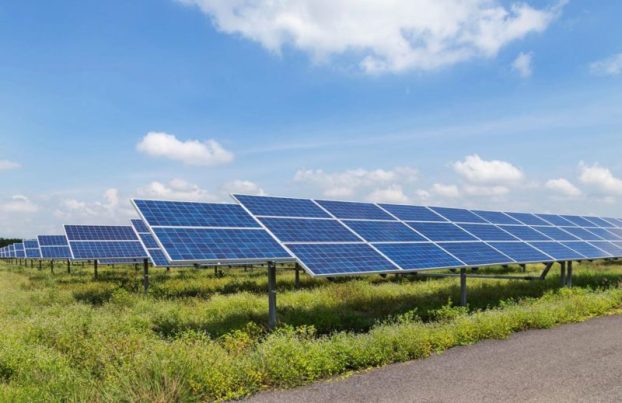 According to the application summary, NOVI Energy proposes to construct a solar facility known as Courthouse Solar on 1,354 acres from 12 parcels owned by Blue Rock Resources, LLC, Ridgeway Farm LLC, and Robert Locke.

Energy generating equipment will be located on approximately 1,000 acres.

Shady Oaks Road, labeled to be one of the main construction entrances, was brought into question by Lynn Royster, who cited potential safety traffic issues.

Royster, developer of the Shady Oaks residential area, addressed the planning commission with his concerns during its September meeting and again during the Oct. 27 public hearing.

Royster said Shady Oaks Road is a narrow dead-end road that serves 19 residences, many with children.

“I am concerned about the safety of the children,” Royster said. “The road is only 15-feet wide, and those big trucks are 9-feet wide. Shady Oak Road is not a safe route for construction vehicles for a major utility-grade solar facility.”

Following the September meeting, NOVI Energy has offered to reduced speed on the road, provide a flagman, restrictions during school bus pick-up and drop-off hours, add sidewalks, and bike lanes.

Royster said he was still concerned about safety issues and wanted to know who would police these rules and regulations put into effect.

“Solar facilities do not emit pollutants to air or water, do not make noise nor over illuminate our rural dark night skies. Solar facilities can include native grasses and plants for pollinators and generate much-needed income for rural local governments.  All this is good,” Pettus said. “But utility-scale solar facilities do displace and disrupt.

“The goal for local governments is to ensure that utility-scale solar facilities are located where we achieve a “win-win.” Solar is a good thing — a win for the climate. But if solar displaces something that was already good and worthy of protecting, we don’t have a win-win, but a win-lose.”

Pettus spoke of the approximately 1,400 largely forested acres assembled from three landowners for Courthouse Solar that straddle Roanoke Creek, several of its tributaries, and extensive wetlands.

“Please defer action on this application for at least 90 days,” Pettus said. “Use this time to contact natural resource agencies and Virginia Tourism Corporation to better understand the values and benefits of what we already have and what we could lose.”

Originally, NOVI Energy had proposed setbacks of 50 feet from wetlands and the center of streams. Staff report documents on the proposed project state that now NOVI Energy agrees to a minimum 600-foot buffer on the Roanoke Creek. The buffer will not be centered on the creek, but it will be a minimum of 100 feet on each side. This will provide an additional buffer to Roanoke Creek.

The decision will now move to the Board of Supervisors for their approval of the CUP. The supervisors are expected to hold a public hearing on the CUP at the board’s December meeting.