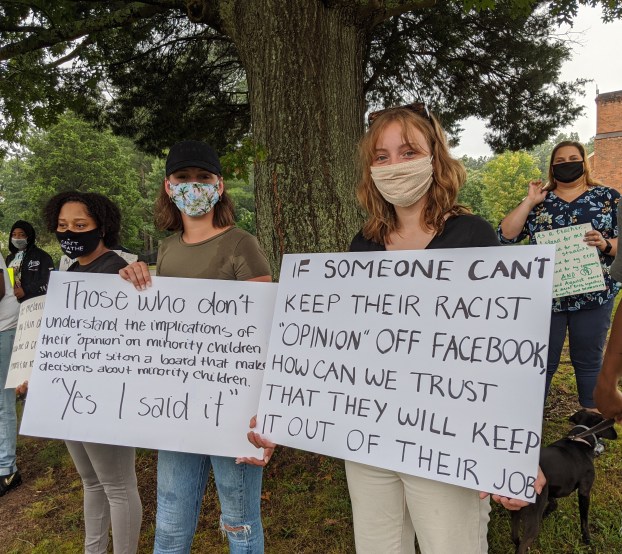 Current and former Randolph-Henry High School students took part in a protest in from of the school board office following a Facebook post by school board member Teresa Dunaway. Pictured are, from left, Charity Walton, Caroline Jubb, and Lillian Jubb.

Following a Facebook post by an elected Charlotte County School Board member, a peaceful protest was held in front of the school board office on Friday, Jul 31 by citizens, students, educators and who say the member should be removed or resign her position.

School Board member Teresa Dunaway shared a post on her Facebook page Tuesday, July 28, about the George Floyd Hologram Memorial Project making its first stop in Richmond. In doing so, Dunaway made a comment several citizens and educators say was racist. 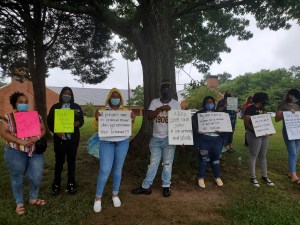 A group of students, citizens and educators stand outside the Charlotte County School Board office protesting on Friday, July 31.

On Monday morning following the protest Dunaway said she had no comment as she was preparing for surgery and needed to focus on her health.

The post by Dunaway on the news story about the event said, “Stupid as hell. Yes I said it!”

Both School Superintendent Robbie Mason and School Board Chairperson Gloria Talbott declined to comment on the issue.

Dunaway’s post received a comment from Randolph-Henry High School graduate Cole Pillow who asked that Dunaway resign. “I ask that Teresa Dunaway step down. We need people in our public offices, especially in our schools who believe in justice, equity, and human dignity. People who don’t shame the people they are elected to represent or who fail to see fault in their actions. As former SGA President of RHHS, I am appalled that a figure such as Teresa doesn’t understand how much influence she has over the students in our county. “

“The things I post on my page are my opinions only. They are not my family, in-laws, friends, or neighbors. They do not speak for me, and they are not responsible for what I post. It is just my opinion.”

On Thursday afternoon, July 30 when messaged on Facebook, Dunaway said her comment was “in no way racial” and that her choice of words may have made some people mad she does feel that she is entitled to her own opinion.

“I said why not have memorials for all the murdered. Especially the innocent little children who now have no life. Where is their justice? That is all. I would have posted the same thing if it was about a red, blue, green, white, or purple man.

“Why just single out one person when so many have lost their lives to violence in the last few months. I think they all need justice and memorials too.”

Randolph-Henry High School educator Monique Williams said the post was sent to her from a concerned parent.

“I am growing very tired and weary of having to keep having these discussions, especially considering the education and government setting,” Williams said. “As a member of our community who is black and an educator, this just makes me question leadership significantly. The insensitivity and lack of decorum are alarming. Her behavior and comments are inappropriate, and the fact that she does not believe she is behaving inappropriately indicates that no amount of sensitivity training will fix the problem. We need accountability and progressive discipline or termination.”

Chelsea Nash at fifth-grade teacher at Eureka Elementary School was present at the protest and following said school board members who post on their own social media accounts must still be held responsible for their words.

“At this point, it should be clear that what you say and do on your personal social media accounts still have repercussions—especially when working with children. The second line of the comment made it clear she knew what she was posting could create tension, yet she posted it anyway,” Nash said. “I have read comments from those defending her, and it is astounding that so many don’t see the problem … Our elected officials should be held to a higher standard, and undercurrents of racism create mistrust.”

Educators offered information on civic engagement, providing tip sheets and resources to help youth and young adults better understand local government processes, how to present at the county’s school board and board of supervisors meetings, and encouraged them to get involved in student groups and clubs in high school and on their college campuses.

Following a Facebook post by an elected Charlotte County School Board member, a protest has been scheduled for Friday, July... read more