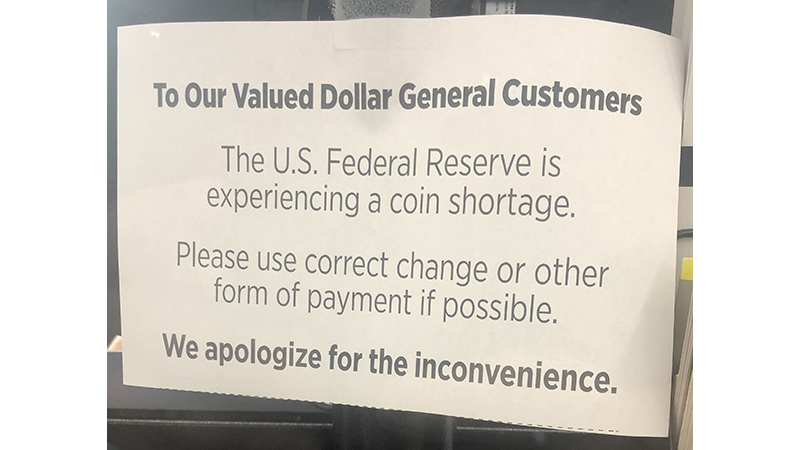 Shown is a sign at the Keysville Dollar General Store checkout asking customers to use correct change.

Many retail stores are now asking customers to consider paying for items with a credit or debit card rather than cash and coins due to a nationwide coin shortage.

The Food Lion in Keysville and Dollar General stores throughout the county are two businesses that are seeing a coin shortage.

“We currently have signage in Food Lion stores stating, ‘Due to a nationwide coin shortage, kindly consider paying with exact change or an alternate tender if you are able,’” Kelly Powell, external communications and community relations specialist with Food Lion said.

“Due to the current Federal Reserve coin shortage, we are currently encouraging customers to use correct change or another form of payment, if possible,” Angela Petkovic, of the Dollar General Corporation public relations department, said,

“There are a couple of reasons for the shortage. One of the main reasons is the economic shutdowns, which significantly slowed the flow of coins through households, businesses, and banks, according to a press release from the federal reserve.

Also, the issuing authority for U.S. coin, U.S. Mint, reduced coin production to keep employees safe. Also, the reopening of businesses caused an increase in demand, which resulted in an uptick in Federal Reserve coin orders.

As of April 2020, the total value of coins in circulation was $47.8 billion, an increase from $47.4 billion reported for April 2019. While there is an ample amount of coins, the slowed pace of circulation is causing a sufficient quantity of coins not available where it’s needed.

The Federal Reserve’s role in coin operations is more limited than its role in currency operations. As the issuing authority for coins, the United States Mint determines annual coin production. The reserve banks, however, influence the process by providing the mint with monthly coin orders and a 12-month rolling coin-order forecast.

According to the federal reserve release, it’s working on several fronts to mitigate the effects of low coin inventories.