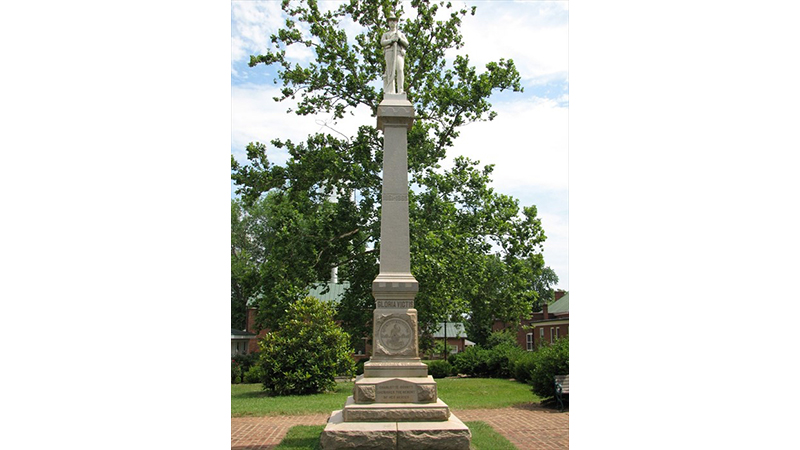 The Confederate Memorial monument located in the courthouse square has become a topic of discussion for the county’s Board of Supervisors.

Like many other localities, Charlotte County is now faced with what they must do with a Confederate statue –  remove it or leave it.

On July 1, new legislation took effect, giving cities and counties around Virginia the power to remove Confederate monuments they own and maintain under the new law.

During its July 13 meeting, the Charlotte County Board of Supervisors (BOS) heard from several citizens who opposed the removal of a monument of a Confederate soldier atop a pedestal in the courthouse square.

Charlotte county cherishes the memory of her heroes.

Erected under the auspices of H. A. C.”

During the public comment portion of the meeting, Ron Graves, commander of the Charlotte Gray Sons of Confederate Veterans, said, “What’s going on is unacceptable,” telling BOS members the monument’s history.

Kathy Palmer also addressed the BOS saying, “It is a sad day when we have to meet and discuss the fate of our county’s monument. Ironically, everyone in this county is free to celebrate their diversity, their history, their culture, that is unless you are Southern and descended from a Confederate soldier. I ask you to be cautious. This, the idea of destroying history and heritage, is a slippery slope. Where will it stop? I ask for your support in the protection of the monument.”

During the meeting, a letter was read from James Morton, who wrote, “I think it is of utmost importance to remove the Charlotte County Confederate Monument.”

In his letter, Morton went on to write, “Monuments, statues, schools, seals, and even road names celebrate people and put them on a pedestal (sometimes literally). The Confederacy was many things, and Southern history is a proud one. But the Confederacy also fought to preserve the enslaving of Americans, and the oppression and murdering of many African Americans. I believe the actions do not reflect the values of the community and are deeply hurtful to decent people everywhere. It is also important to remember that many Confederate monuments and names were dedicated in the first half of the 1900s, when minorities were trying to gain human rights.”

“it’s about finding the right way to remember it,” Morton said. “If we want to remember this part of Southern history, we should do it in a museum, where people can learn about it while understanding the context of time.”

Prior to removing, relocating, contextualizing, or covering any such publicly-owned monument or memorial, the local governing body shall publish notice of such intent in a newspaper having general circulation in the locality.

The notice shall specify the time and place of a public hearing at which interested persons may present their views, not less than 30 days after publication of the notice. After the completion of the hearing, the governing body may vote whether to remove, relocate, contextualize, or cover the monument or memorial.

The local governing body shall have sole authority to determine the final disposition of the monument or memorial.

In addition, A locality may, prior to initiating the public hearing may petition the judge of a circuit court having jurisdiction over the locality for an advisory referendum to be held on the question of the proposal to remove, relocate, contextualize, or cover any monument or memorial located on the locality’s public property.

Upon the receipt of such a petition, the circuit court shall order an election to be held.

Vice-Chairman Gary Walker made a suggestion to table the issue, saying he felt no action should be taken until they hold a public hearing.

“I don’t want anyone to think we might sneak up here one evening and have a vote like Farmville Town Council did,” he said.

On June 13, Farmville Town Council held a brief reconvened meeting that was not live-streamed beginning at 7 p.m. By 7:30 p.m., employees were removing a Confederate statue from its pedestal at the intersection of High and Randolph Streets. There was no open discussion on the removal, only a motion to remove the statue.

The BOS now plans to create a committee made up of individuals from various community organizations to discuss the issue with the expectation they would make a recommendation to the board.