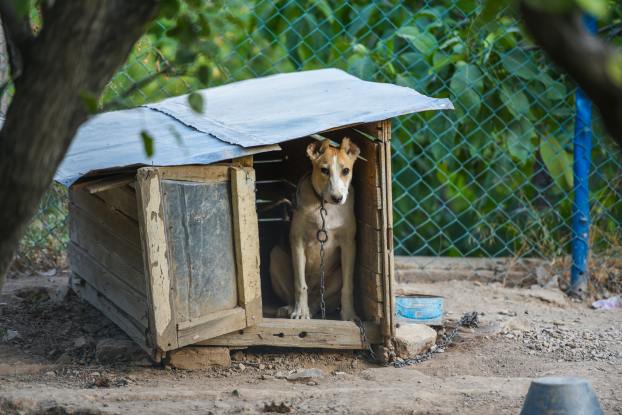 Virginia law prohibits the tethering of dogs outside during extreme weather.

Often a tethered dog is a forgotten dog.

A new law that went into effect July 1, prohibits the tethering of dogs outside during extreme weather. The legislation also increases the minimum length of a tether from 10 feet to 15 feet.

Assistant Director Francee Schuma of the Southside SPCA said that far too often they see animals suffering on a tether.

“Their chains/cords are wrapped so tightly around trees or other objects that they cannot reach their food, water, or housing,” Schuma said. “More often than not, the water has been turned over by the tether and the animals can go hours, if not days, without water. Well-worn paths, or ruts, are evident where frustrated and lonely dogs pace back and forth, day in and day out.”

Schuma further said, “Most of the dogs we encountered that are tethered are severely malnourished and unsocialized. Sadly, many of the calls for help that we receive are for animals tethered in extreme weather conditions or inadequate housing, food, or water.”

The new law also expands the definition of what it means to provide “adequate shelter.” It prevents leaving tethered dogs outside when the temperature is 32 degrees Fahrenheit or below and 85 degrees or higher or in adverse weather conditions such as during warnings for hurricanes, tornadoes, and other severe weather.

The law says companion animals must have adequate shelter during hot weather that is properly shaded and does not readily conduct heat. During cold weather, a dog’s shelter has to have a windbreak at its entrance and provide a quantity of bedding material consisting of straw, cedar shavings to protect them from the elements.

Schuma said the new law is important, not only to protect animals but also for the protection of the community.

“Dogs that are tethered for long periods of time can become highly aggressive and pose a threat to anyone that comes in their territory,” Schuma said. “Usually, children are at greatest risk for bites from tethered dogs.  A tethered dog also cannot flee a situation where it is being threatened, thus making it more susceptible to attacks from other animals, including those that carry rabies.”

Schuma said the Southside SPCA is pleased these laws have been passed and are available to offer assistant to members of the community that may need a crate or other supplies to help bring their pets indoors.

The Charlotte County Sheriff’s Office is asking for help in identifying the individual in this photo in connection with an... read more