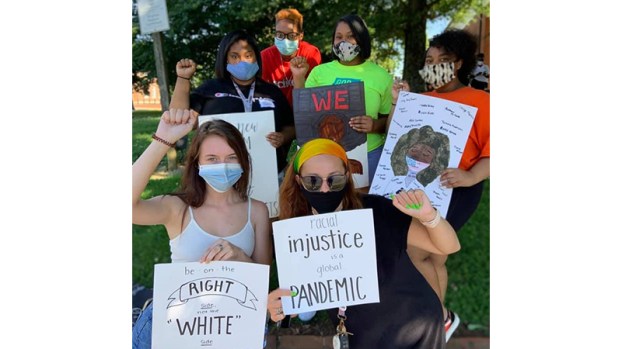 The first Charlotte County Community Day of Action was held on Wednesday, June 24, in the courthouse square in Charlotte Court House. The event brought out students from Randolph-Henry High School as well as community leaders.

Monique Williams, an organizer of the event, said the Day of Action was created as a call to action for the Charlotte County community to stand together in the fight for social justice, equity, and change.

“By bringing together community members, community leaders, youth, young adults, and educators, we believe that we can achieve greater equity and inclusion in our community, our state, and our nation,” Williams said.

The event featured groups such as the Fresh Boys Club, a mentoring program from Farmville that brings boys from Charlotte, Prince Edward, Buckingham, and Cumberland together to provide positive youth development and community service.

Tanea Doswell, a 2020 honors graduate of Randolph-Henry High School, also shared her perspectives and thoughts on how youth can be more involved and engaged in social justice.

According to Williams, the Community Day of Action is a response to the initial “Black Lives Matter” peaceful protest that was organized by educators Emily Preuss-Anderson and Chelsea Nash in June.

“When I learned that my colleagues organized a peaceful protest, I immediately jumped in,” Williams said. “Here were two women, who are not of color, standing firmly on beliefs and values that I hold dearly.”

For Stephanie Atwood, she took part in the event because she has always supported the Black Lives Matter movement.

“This Day of Action is important,” she said. “It’s an outlet to not only show support, but to also learn other ways to continue supporting in the future.”

Williams said she feels the Community Day of Action is a step in the right direction to help the community become “antiracist.”

“This is not in any way saying that we as a county are racist,” Williams said. “Instead, it is us calling and bringing attention to the fact that in our community, we have significant levels of inequity, wealth, and power. We have significant underrepresentation of leaders of color in many areas of decision-making from our board of supervisors to our school board, and even within our education workforce, which is the largest employer in our county. There are some great opportunities that exist for which we can as a community enhance the diversification in our community to attract such leaders, but we cannot do that if we stand behind the oppressive and racist beliefs that are holding this nation back.”

According to Williams, since the Community Day of Action, various members of the community have come together to build greater solidarity in support of racial equity, justice, and inclusive and diverse social change.

“We formed a committee of young adults and adult members with various levels of education, work experience, and background,” she said. “In many ways, we are becoming new leaders for our community because we united for change and are working to actively expand our work.”

According to Williams, a second Community Day of Action is scheduled for July 22 from 5 p.m. to 7 p.m., where the focus will be on voter registration and rights.

The Department of Game and Inland Fisheries (DGIF) has issued a warning about a species that has been discovered at... read more