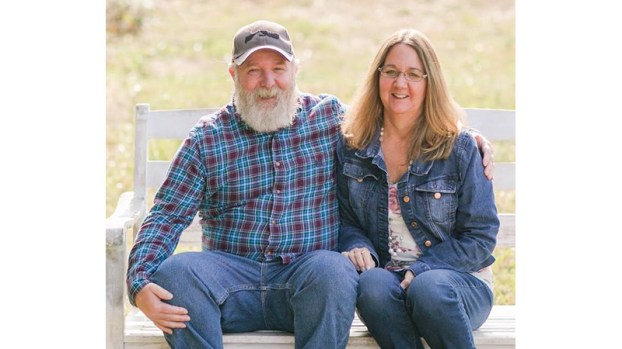 Beaver and Patricia Berkeley have been fighting Alzheimer’s together since his official diagnosis in December 2014.

Imagine, due to COVID-19 restrictions, not being able to visit in person your loved one who is living in a long-term health care facility. Imagine that they are having trouble remembering things and are nonverbal.

This is the reality that Patricia Berkeley has been living, all while maintaining a full-time job as the county’s treasurer.

Berkeley’s husband of 31 years, Beaver, was diagnosed in December 2014 with Alzheimer’s, but she said she knew way before then.

“He had been symptomatic since 2010/2011,” Berkeley said. “He had been going to the doctor for several years, running various tests, trying to determine what was wrong. They kept telling us it wasn’t Alzheimer’s, but I knew.”

According to Berkeley, Beaver, who was 55 at the time of diagnosis, is in the later stages of the disease.

In January 2019, Beaver entered Runk & Pratt Pearls of Life Memory Support in Lynchburg, where Berkeley was able to visit with him at any time until COVID-19 forced the facility to close its doors to all visitors.

Berkeley said her last in-person visit was on March 14 and that this phase has made her sad and uneasy and worries that Beaver may not recognize her when she gets to video chat with him.

“I was fine at first because I thought it would be for a couple of weeks,” Berkeley said. “I miss being able to spend time with him. It’s getting more challenging the longer we are in this phase, and I am afraid of his reaction when he sees me again. I wonder if he will recognize me.”

Berkeley said she thinks she is still somewhat familiar to him because he will open his eyes when he hears her voice, but his recognition is decreasing.

As for Beaver, Berkeley said he is not able to understand the situation.

“I am sure he knows something is different, but it hasn’t had a negative impact,” she said. “I think it’s harder for me. He is slowly dying, and I am missing valuable time.”

According to Berkeley, she does not know when the facility will open again for visitors so she can see Beaver, and that, in itself, is unsettling.

“I’m fearful he could become ill and/or die, and I would not be able to be with him,” she said.

Alzheimer’s has not only affected Berkeley and Beaver, it has stolen away the memories Beaver has of his son, Alan.

“He has missed out on watching his son mature into an adult,” Berkeley said. “Our son stayed home for two-and-a-half years after he graduated from college to watch his dad while I worked. His dad hasn’t known him for the past couple of years. He has no recollection of his life. All of his memories are gone.”

Ever since Beaver’s diagnosis, Berkeley has been a strong advocate for the fight against Alzheimer’s and for her husband’s health and well-being.

“The best medicine for an Alzheimer’s patient is socialization,” Berkeley said. “You just have to adapt to their world. As a caregiver, you have to be their advocate every step of the way, and as the disease progresses, you have to remember it’s the disease, not them. They can be aggressive or do some odd things because they don’t realize what they are doing.”

Berkeley said one of the hardest things about Alzheimer’s is watching someone you love lose all their memories.

“It’s not just about forgetting your name. You slowly lose your ability to do anything,” she said. “It’s just heartbreaking.”

June is Alzheimer’s and Brain Awareness Month, and it is only through increased awareness and research funding that new ways to treat Alzheimer’s and other dementia will be discovered.

Early diagnosis provides individuals opportunities to maximize time spent engaging in meaningful activities, to interact with important people in their lives and to allow individuals more time to plan while they are cognitively able to make important legal, financial and end-of-life decisions.

Each year the Berkeley family team participates in the Alzheimer’s Association Walk to End Alzheimer’s held in Farmville at Longwood University.

Every dollar raised through Walk to End Alzheimer’s allows the Alzheimer’s Association to provide 24/7 care and support while accelerating critical research.

A donation to the Berkeley Team can be made at https://act.alz.org and search for the team name Berkeley.

‘Crazy it got taken away’

Carson Gibbs will compete on the diamond at the college level, but his high school baseball career will always feel... read more