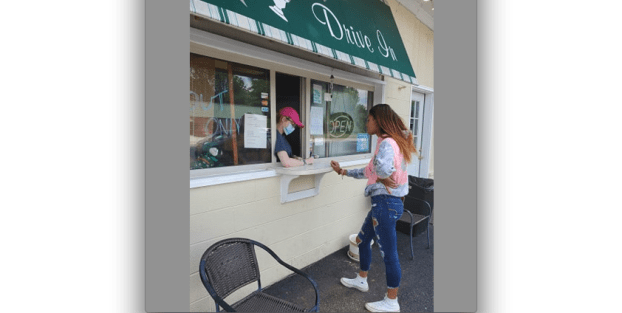 Jessica Toombs an employee at Village Drive-In takes a food order from Shakayln Roberts. Village Drive-In has been staying busy serving customers through its take-out window since the COVID-19 pandemic began.

Under that order, restaurant and beverage establishments may offer indoor dining at 50% of capacity, fitness centers may open indoor areas at 30 percent occupancy, and certain recreation and entertainment venues such as museums, zoos, aquariums, botanical gardens, and outdoor concert, sporting, and performing arts venues may also open.

Swimming pools were able to open as well.

Village Drive-In in Charlotte Court House, who has been offering take out only posted on their Facebook page on Friday, stating, “Due to space at the Village Drive-In, we will not open to the public until we are 100% capacity.”

For Pino’s Italian Restaurant in Keysville they posted, they would be partially open for dining inside with no more than four or five people allowed per table.

Both Cruis-in Café and Sheldon’s Restaurant are open for inside dining, according to their Facebook pages.

Even with restrictions lifted this past week, several citizens said they would not be taking part in going out, nor would they feel safe doing so.

“I think it’s too early to go to this phase, especially with all these protests going on, in two weeks I bet the numbers will skyrocket, then we will be shut down again,” Mar Mingo said.

For Vickie Brooks, she said she would not feel safe. “I won’t be visiting any of these places.”

Hunter Harris commented, “Restrictions should be lifted 100%. “If you don’t feel safe, then you stay home.”

Under Phase 2, the maximum number of individuals permitted in a social gathering has also increased from 10 to 50 people, but social distancing is still recommended.

Positive cases on the rise

The Virginia Department of Health (VDH) reported 570 new positive cases of the coronavirus in the commonwealth Tuesday, June 9... read more