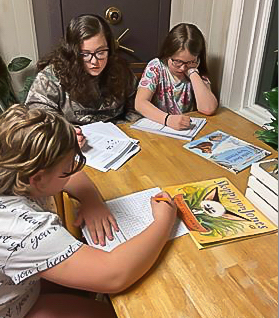 Pictured are, from left, Chloie, Lizzie and Maycie Redmond working on their school packets.

Families adjust to a new norm

Families across the country are learning a new routine and adjusting to daily changes that have occurred due to the COVID-19 pandemic. Families in Charlotte County are no different.

With all schools in the county now closed, parents are faced with trying to keep their children occupied and tasked with homeschooling.

Crystal Shepherd, whose three children attended Phenix Elementary School, says her children have mixed emotions about being out of school.

“They miss their friends and teachers, but they don’t miss having to get up early or homework at night,” Shepherd said.

Shepherd, who continues to work a daily job, said she feels lucky to have a sitter who is able to keep her children busy during the day.

“She helps me tremendously,” Shepherd said. “She has gotten them on a schedule of breakfast, reading, lunch, packet work, crafts, snack time, outside play, etc.”

Even though her children are not in school now, Shepherd says she likes the idea that they are getting to do things that they would not normally be able to do this time of year.

“I love that they are able to spend time exploring things outside they normally wouldn’t have time to do,” she said.

Shepherd does have her concerns about her children not being in school.

“I am concerned that they will not meet the standards for the next grade this coming fall,” she said.

Amanda Redmond of Keysville is also keeping her daughters Lizzie, Maycie and Chloie on a daily schedule.

“The kids are on a routine with everything, sleep, exercise, and eating,” Redmond said. “There’s no sense of normalcy right now, and it’s new and scary for all of us and not enforcing rules and trying to stick to somewhat of a schedule is only going to set them up for failure in the long run.”

Though the Redmonds are sticking to a routine and trying to create a sense of normalcy for their daughters their mom says they are still feeling the effects of being out of school.

Redmond says each day her children are tasked with working on the educational packets the school sent home a few weeks ago and she makes them read a book each day.

“I’m worried they are going to get complacent and forget what they have learned this year,” Redmond said.

In addition to schoolwork, if the weather is nice each day, the three girls spend some time outside.

“I want them to do some schoolwork and continue to read, but I also want them to be kids,” Redmond said. “This whole way of life is new for everyone right now. And when I’m stressed, it causes stress on them and vice versa and right now, we can only take this one day at a time.”