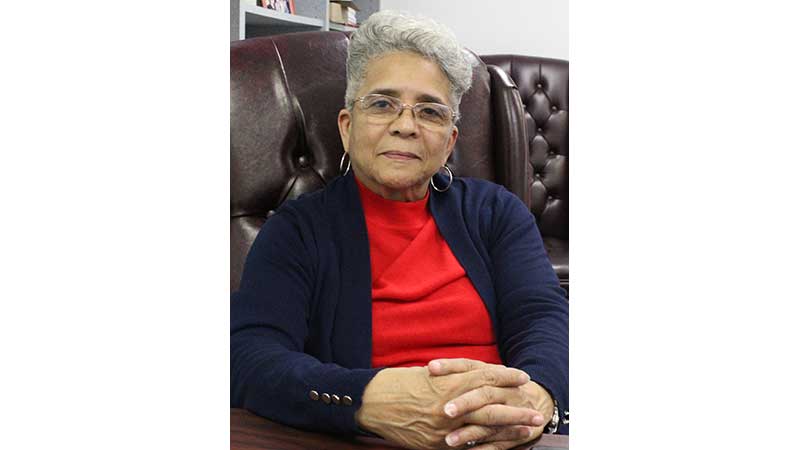 Charlotte County Voter Registrar Nan Lambert has served as the county’s registrar for the past 33 years. (Photo by Crystal Vandegrift)

Nan Lambert, Charlotte County’s longest-serving general registrar and director of elections — 33 years — was raised to believe she could be and do anything if she was willing to work for it.

Today, Lambert works in her office covering the county’s elections, just a stone’s throw away from where she spent her childhood.

“I was born in New York to Walter and Marie Battle White, but I was raised by my paternal grandparents, Anthony and Etta White, about a quarter of a mile from my current office,” she said. “My childhood was typical for that era. We didn’t have all this technology. We played outdoors with the neighborhood kids (there were about 20 of us) all day after doing chores.”

Lambert’s values she learned as a child have more than carried her through life. She says while she has served as general registrar/director of elections for Charlotte County under nine governors, she does not play politics.

“While the make-up of the Electoral Board (which appoints the general registrar/director of elections) changes with the party of the governor, I run my office according to the Code of Virginia,” she explained. “Each time I am appointed, I take an oath to uphold the Constitution and Code of Virginia. I take that oath seriously. Sometimes the responses I must give people are not what they want to hear, but it’s the law … I don’t bend it, nor do I circumvent it.”

Along with being a certified professional general registrar and voter registration election official and director of elections, Lambert has served as first vice president of the voter registrars association of Virginia (VRAV) twice and currently serves on the VRAV Legislative Committee.

Lambert commented while some may think that the general registrar’s office only works a few days out of the year leading up to and the day of an election, that is simply not true.

“We are busy every day,” she said. “We have the responsibilities of human resources, manager, and sometimes Information Technology professional.”

Lambert says because Charlotte is a small locality, participation in committees, meetings and workshops is essential to being able to obtain a reasonable slice of the funding from the state and the federal government.

“This strategy has served our county well, especially in recouping thousands of dollars in reimbursements for mandated voting equipment and monies expended on primaries,” she said. “I am confident Charlotte County’s Voter Registration Office can more than hold its own against any in the commonwealth.”

Lambert is married to her husband of 51 years, Luther, and they have three children, nine grandchildren, and four great-grandchildren.

With her busy job, Lambert says though she may not always have a lot of free time, she makes the time for her family, church, and her side business her and a friend have started.

Her love for cooking led her and a friend into the business of preparing home-cooked meals for church homecomings, repasts, family reunions, weddings, birthdays, etc.

In addition to cooking meals, you can find Lambert also singing in the Morrison Grove Baptist Church Choir, serving as the church’s financial secretary and being a part of the church’s kitchen committee, all the while preparing church bulletins and funeral programs.

“I have met so many wonderful people throughout Charlotte County and the commonwealth, and I love the small-town feel that we have here in the county,” she said. “That’s what makes Charlotte County a great place to live and work.”