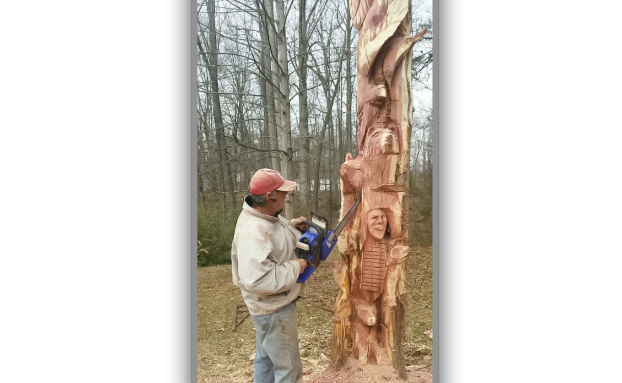 Tommy Winn, a Mecklenburg County resident, spent 23 hours carving a 70-year-old cedar tree into a piece of art using only a chainsaw.

Winn was hired by Drakes Branch resident Terry Tharpe to create a one of-a-kind piece of artwork.

“I wanted a piece of artwork that commemorated my Indian heritage,” Tharpe said. “He carved an Indian and bears and other animals into the tree, and it is absolutely beautiful.”

Winn, 62, has been making a living as a chainsaw sculptor since 2007 and says every piece he creates is a masterpiece.

“This is not a job to me,” Winn said. “When you are doing something that you love, it is not work.”

Winn refers to himself as a starving artist, but says he has been blessed.

“I was into doing drugs and drinking all the time, but in 2007 when I gave my life to God, that all changed, and I started carving the next day.”

Over the years, Winn has traveled the country carving trees into various types of artwork.

From large trees that are still living, to those that are dying and stumps left behind, Winn says he can carve them all.

“Some people just want their tree carved for the sake of having a piece of art in their  yard,” he said. “Some want to have a tree that is dying carved rather than have it cut down.”

According to Winn, carvings can take anywhere from 15 minutes to several days to complete depending on what his clients ask for and what he envisions.

Winn has 15 chainsaws he uses when creating his masterpieces.

“Each one has a different type of bar that is used for different things from the actual carvings to the fine details,” he said.

It was in those details that Tharpe says the artwork Winn created for him was, “Everything he had envisioned and more.”

Three years into a new tax system errors continue to persist following a software update in 2017. Since the update,... read more