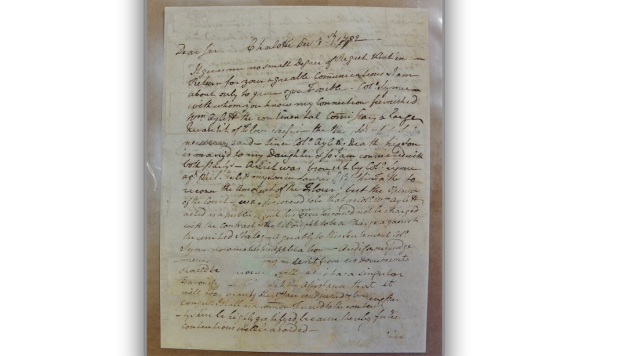 Pictured is a rare handwritten letter by Patrick Henry that Red Hill officers are seeking to have restored.

A rare handwritten letter, penned by Patrick Henry in 1972, advocating for the rights of Cherokee Indians in the U.S. is one of 10 artifacts that has been selected to compete for a $2,000 prize that will be used to conserve and restore this letter.

According to Caitlin Pieper, director of education at Patrick Henry’s Red Hill, the organization applied for The Endangered Artifacts program through the Virginia Association of Museums. “There were 30 applications from museums across the state, so we are honored to have been selected in the top 10,” said Pieper.

The Virginia Association of Museums’ Virginia’s Top 10 Endangered Artifacts program identifies significant, endangered artifacts in the care of museums, historic sites, and other collecting institutions across the Commonwealth of Virginia and Washington DC and creates awareness of their importance as well as the expense of their stewardship.

According to the description of the letter at Red Hill, the handwritten correspondence is between Brigadier General Martin and Henry, in which he states his support and sympathy for the Native American people.

Citizens can help conserve Henry’s letter by casting a vote at www.vamuseums.org/vote-2019-top-10-endangered-artifacts.

To see a photo of the rare handwritten letter by Patrick Henry tun to page 3.