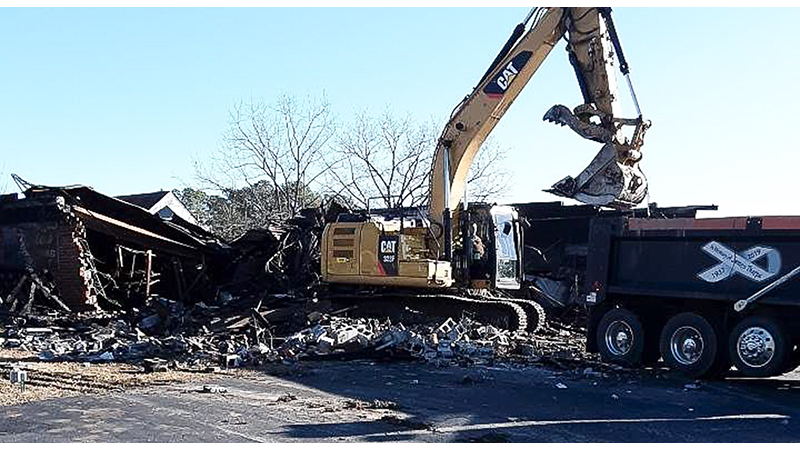 What is left of Whites Building Supply in the Town of Keysville was being torn down last week in hopes of constructing a new building soon.

Workers were busy last week taking down and removing the remains of the Whites Building Supply store that was destroyed by fire during the early morning hours of Dec. 12.

According to co-owner Beth Shook the cause of the fire was undetermined due to its extensive damage.

Shook purchased the business with co-owner Don Nelson in November 2017. “We had just celebrated our second anniversary in business,” said Shook.

According to Keysville Volunteer Fire Department Chief Lynn Duffey, 11 departments responded to the blaze that was fully involved when firefighters arrived on scene around 4 a.m.

Duffey said the fire is believed to have started in the right back portion of the building.

In the Dec. 18 edition of The Charlotte Gazette Shook said she and Nelson, “Absolutely plan to rebuild.”

On Monday, Shook noted, “We are in the process of finding an architect and a contractor.”

Shook says even though the office for the business is currently in a home on King Street in Keysville they have begun making a mini store at the lumber yard that customers can utilize.

“I definitely miss seeing all of our customers,” said Shook.

Shook further stated that both the county and Town of Keysville have been helpful in sending her in the right direction to get the needed paperwork and answering questions.