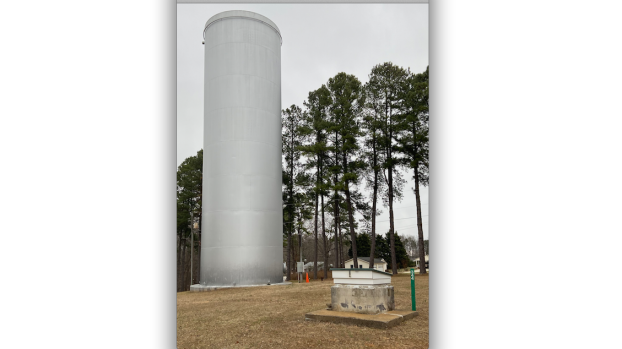 Pictured is the Town of Phenix water tank. Town officials are working with the Commonwealth Regional Council and the Virginia Department of Health-Office of Drinking Water to provide residents with better drinking water.

The Commonwealth Regional Council (CRC) is continuing to assist the Town of Phenix in its effort to improve its municipal water system.

The town was awarded a $500,000 grant/loan from the Virginia Department of Health-Office of Drinking Water (VDH-ODW) in 2017.

According to Town of Phenix Water System Operator Walt Bailey, $150,000 will come in the form of a grant while the remaining $350,000 will be a low-interest loan incurred by the town.

According to CRC Deputy Director Todd Fortune in 2017, the Town of Phenix was experiencing water pressure issues and applied to the VDH-ODW to fund replacing water lines and install a hydro-pneumatic tank to help increase pressure.

That project was put on hold when in May 2018 when the Town of Phenix was hit with a water-quality violation.

According to Fortune, a test at well number two, located on the western end of the town, was found to have slightly exceeded the regulated rate for a natural radiological contamination called Gross Alpha.

“At that point, we needed to stop the project,” Fortune explained. “Because water-quality issues became more important than water-pressure issues.”

To combat the water-quality issues, Bailey says that well number one was brought back online, and water from that well was mixed with the water in well number two.

“The levels were creeping up and when we mixed all the water in the wells that reduced the levels,” Bailey said.

Bailey further stated the levels of Gross Alpha detected in well number one would need to be consumed at the rate of one gallon a day for 70 years to pose any ill effects.

“Having said that, we certainly do not want anyone to have any ill effects from drinking the water,” Bailey said.

Gross Alpha, according to the Environmental Protection Agency is the amount of radioactivity in drinking water.

According to Fortune, most of the funding will now be used toward the construction of a new well with any remaining funds used to address water-pressure issues.

Bailey said town officials are currently looking for well-site locations. He hopes to have the new well operational within six months.

“We need both quality and quantity of water,” Bailey said. “The goal is to have water that we do not need to treat with any chemicals.”

With 136 residential customers on town water at a $35 a month base rate for usage, Bailey noted he does not foresee the new well causing a significant increase in cost for residents.

“Thanks to the wise decisions of the town council members over the years, we are where we needed to be in terms of water rates, so we are not looking at a big increase,” Bailey said.

Veterans council to get new building

In the spirit of giving, the Piedmont Area Veterans Council (PAVC), which serves veterans and their families in Charlotte County,... read more