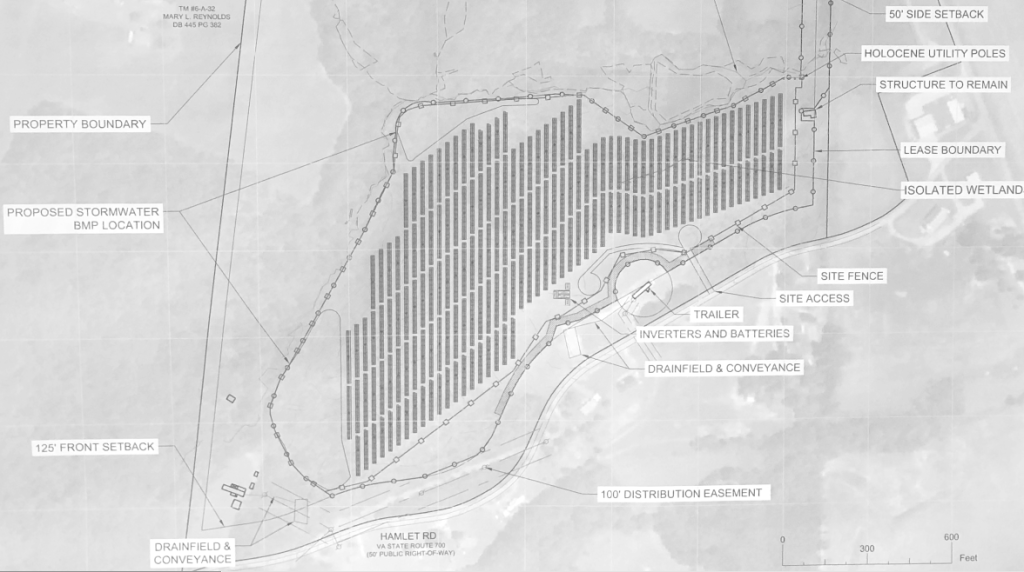 Pictured is a site map from Holocene Clean Energy depicting the area in consideration for the Red House Solar Farm.

The Charlotte County Board of Supervisors (BOS) tabled a vote on approving a Conditional Use Permit (CUP) submitted for a utility-scale solar facility in Red House, during its Dec. 11 meeting citing more information was needed.

Both supervisors Kay Pierantoni who represents the Wylliesburg/Red Oak District and Phenix/Aspen Supervisor Donna Fore stated they needed more information on decommissioning and the impact fees associated with such before they could vote.

Decommissioning is the process of removing abandoned solar panels and remediating the land.

“I really think there are too many questions,” said Fore. “I don’t know why we should move forward at all until we have a lot of this cleaned up.”

Pierantoni commented saying, “Before we approve it, we need to be aware of exactly what that those financial numbers look like.”

The property, approximately 7.5 miles from the Town of Phenix, is in the community of Red House, just west of the intersection of Route 727 and Route 615 and is owned by Norman Reynolds and Elizabeth Miller.

According to the CUP submitted by Holocene Clean Energy of Raleigh, North Carolina, the Red House Solar Project includes the development of a utility-scale solar facility that will generate up to 5 MW of energy and connect to the Southside Electric Cooperative distribution lines.

The project will include the installation of solar panel arrays, inverters, electrical transmission lines, an electric substation, other electrical equipment, gravel access roads, fencing to secure the project area, and a battery storage system.

“In total, approximately 20,000 solar panels will be installed as a part of the project,” the CUP cites.

Holocene Clean Energy’s website noted that in the project development process, Holocene works closely with both landowners and local stakeholders, including county commissioners, county planning boards, economic development authorities, permitting authorities and community members. “We want stakeholders to understand that as serious members of their marketplace, we execute responsible, ethical projects in our project development pipeline,” the site states.

In September, the BOS approved a CUP application from SolUnesco and Apex for the Moody Creek Solar Project for the construction of a 150 MW utility-scale solar facility (equivalent to 25,000 homes worth of energy).

The Moody Creek site, owned by Devin Logging Company/ John A. Devin, Jr. and Armistead Tune Devin, is located on Route 47, approximately 1.4 miles east of the intersection of Highways 360/15 and Route 47.

The Moody Creek project will be constructed on property that is approximately 1,655 acres in size.

In total, approximately 555,000 solar panels will be installed after all project phases are completed.

Charlotte County is already slated to see the construction of a 15 MW solar farm, Twitty’s Creek Solar LLC, which has a proposed location of 1975 Highway 59 in the Drakes Branch area.