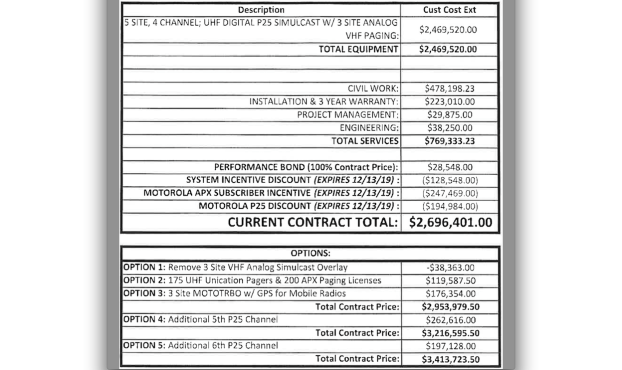 After years of researching, committee meetings, adding and deleting of equipment, the Charlotte County Board of Supervisors (BOS) voted Wednesday, Dec 11, to purchase a radio communication system for the county but not before adding close to a million dollars to the price tag.

All members voted yes except for County Seat Supervisor Gary Walker who abstained.

Following the vote, Walker said that he was not against the recommendation of the new system, but he felt that he needed to abstain because he had little knowledge of the communication system and relied on others to advise him and there may have been another option that needed to by investigated.

In September, the BOS approved an original contract price of $2,696,401 with Radio Communication of Virginia (RCV).

“If you make any big purchase, you are always going to have those second thoughts,” said communication committee chair and Wylliesburg/Red Oak supervisor Kay Pierantoni. “And if we could continue, I think we’d go back and Monday morning quarterback on this, we’d probably do a lot of things to different. This county recognized several years ago that we were in desperate need of a communication system, and then it took many twists and turns. But at some point, on any big decision, you have to stop and say, this is where we are, and this is all that we know, and it’s best to move forward.”

The additional cost now includes two more channels for a total of six talk channels for fire, EMS and police.

In addition, the following is also added to the new system:

During the Nov. 7 meeting of the BOS, the most pressing question that was asked by the Charlotte County Firefighters Association concerned the amount of talk path channels that they had requested versus what was given by RCV.

The document stated, “The RFP that was submitted and accepted from the Radio Communications of Virginia falls far short of meeting the requirements that were stated in the RFP,” said Charlotte County Firefighters Association President Walt Bailey.

According to Bailey, each subsequent meeting that they had with RCV it was reiterated many times as to why their conventional system would not meet the needs of the fire departments.

According to Pierantoni, the communication committee met three times within the past month, and the biggest concerns that were heard came from the fire chief and others who wanted enough channels. “So, we were able to add two more channels,” she said.

Following the BOS decision, Bailey stated that although the new system is not what they wanted, an agreement had to be reached. “We requested a trunking system with 12 channels, but settled for a six-channel conventional system,” Inoperability issues were another concern, but according to Bailey, that has been worked out through technology while the problems of not having GPS tracking has been solved by adding an additional radio to all fire, EMS and police vehicles. “By doing this, we will now have the ability to talk to the school, and those radios have GPS tracking in them,” added Bailey.

Over the months, there were concerns as to if the new system should or should not have advanced encryption. According to Pierantoni, no one on the committee expressed a real need for additional encryption.

Before the BOS vote, Pierantoni stated, “If we move forward with this today, within the next year, we can have this equipment installed, and I believe deputies will be safer and believe that fire and rescue people and the schools will have what they need.”

According to Pierantoni, the additional features and pricing that comes along are within the county’s budget. “I truly believe that again, RCV has done what they need to do. They are a great company that has excellent equipment that we are buying, and we have financing in place with an extremely good rate of 2.3%.

BOS Vice Chairman Robert Shook Jr. said before the vote that he wanted to hear from the end-users as it if the new system would suit their needs. “We don’t want to pass this again and you come back and say, Hey, that ain’t what we need, that ain’t what we want?” said Shook.

Although there were several firefighters present, no one spoke up to answers Shook’s question. However, Bill Mayhew Captain with the Charlotte County Rescue Squad did saying, “I think it’ll do us a good job.”

As for the Firefighters Association, “We are glad that it is finally over and can move forward,” said Bailey. “It’s been a long and drawn-out process.”

An iconic building in the Town of Keysville is no more. Whites Building Supply was destroyed by fire in the... read more