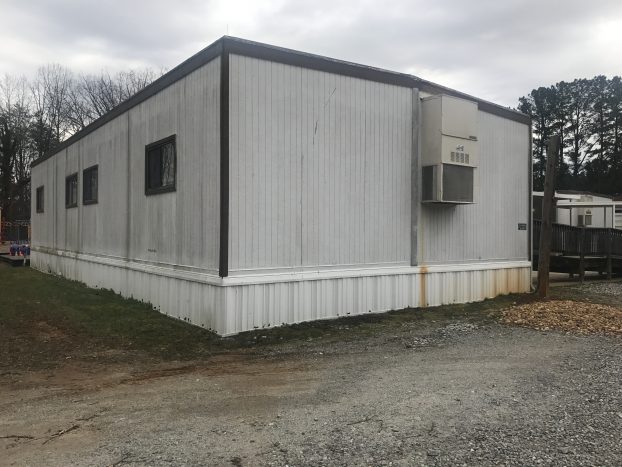 Pictured is a mobile unit located at Phenix Elementary, which could face removal with the proposed addition of eight classrooms at the school.

A special called meeting of the Charlotte County School Board has been set for Sept. 5 at 7.p.m. to continue discussion about upgrades and renovations to Bacon District and Phenix Elementary Schools in the county.

The School Board also met during an Aug. 21 special called meeting.

“We went over blueprints, but felt we needed another meeting to discuss some changes to them,” said Red Oak/Wylliesburg District School Board Member Teresa Dunaway. She said the board also voted to approve the PPEA construction plan at Bacon District and Phenix Elementary, however, further discussion on changes will occur at the Sept. 5 special called meeting.

According to a special called meeting notice, “the purpose of this meeting is for a presentation on the proposed PPEA construction plans for Bacon District and Phenix Elementary Schools …”

Previously in June, the proposal included a fixed price identified at $3.2 to include the addition of a 6,000 square foot multipurpose facility at both Bacon District and Phenix Schools and the addition of eight classrooms at Phenix, which would replace mobile classroom units.

Leonard said the focus was on security and accessibility, at which the entire team met at the two schools to do a walk through.

“The scope of parameters of what we were looking for was what we could do to improve accessibility and security of our schools that would go beyond the $3.2 million but reach a $6 million cap,” she said at that time.

Of the identified upgrades, above the $3.2 million scope, Leonard previously said Bacon District could use additional heating, handicap accessible restrooms and fencing in addition to upgrades in the main office, including moving it to the front and adding a security wall.

She discussed a security wall for both Phenix and Bacon District.

At Phenix, above the $3.2 million scope, Leonard previously said upgrades could include additional faculty parking, separating parent drop off from the bus drop off, additional sight lighting, renovating the administration area and updated circuitry.

Both schools could see kitchen area upgrades, painting, the addition of stage ramps and bus canopies.

A motion regarding the decision to delay school borrowing options until figuring out how much money is needed and the complete scope of school needs recently passed at an August meeting of the Charlotte County Board of Supervisors.

“I move that this board delay this until we meet with the School Board and then have a called meeting to make a decision on how much money is needed and what action to move forward …” said Drakes Branch Supervisor Garland Hamlett, Jr. at that time.

At a July meeting of the Charlotte County Board of Supervisors, Davenport and Company Representative R.T. Taylor was available to discuss school financing options for renovations in Charlotte County.

A summary of school financing options said, “the county is considering a borrowing to fund improvements to its Bacon and Phenix Elementary Schools totaling approximately $3.2 million, plus costs of issuance.”

During that time, three options were presented for consideration.

According to the summary, option one would require an extended credit through BB&T with a fixed interest rate of 3.72 percent.

No additional assets would be needed, as the existing collateral of Eureka Elementary School could be utilized.

In July 2017, the Board of Supervisors and the School Board approved financing with BB&T for a fixed interest rate of 2.60 percent over a 15 year period.

An issuance costs of an estimated $75,000 would be associated with option one.

Option two would include a competitive bank RFP process, which could take upward 60-75 days. The summary said the county/ school system would also have to identify additional assets available to be pledged as security.

Option three would allow the county to apply to and issue bonds through the 2018 VPSA fall pool. The application deadline for option three is August 27 and interest rates would not be set until VPSA bond pricing, occurring near Oct. 16.

The timeframe for option three could take approximately 120 days, according to the school financing options summary.

In addition, while options one and two would not require a public hearing, option three would not.

Pierantoni previously said at some point, money is going to run out. “We took $1.7 million from the reserves this year to balance the budget.”

She said the fact of the matter is that Bacon District Elementary needs a lot more than the indoor activity room currently slated.

Pierantoni also said at that time if community schools are going to be supported, then the money will have to be spent and she questioned why Bacon District is always left out.

Phenix Aspen Supervisor Donna Fore also said previously the deadlines for some of the options would be coming soon and if the decision was delayed too long, some of those options would no longer be available.