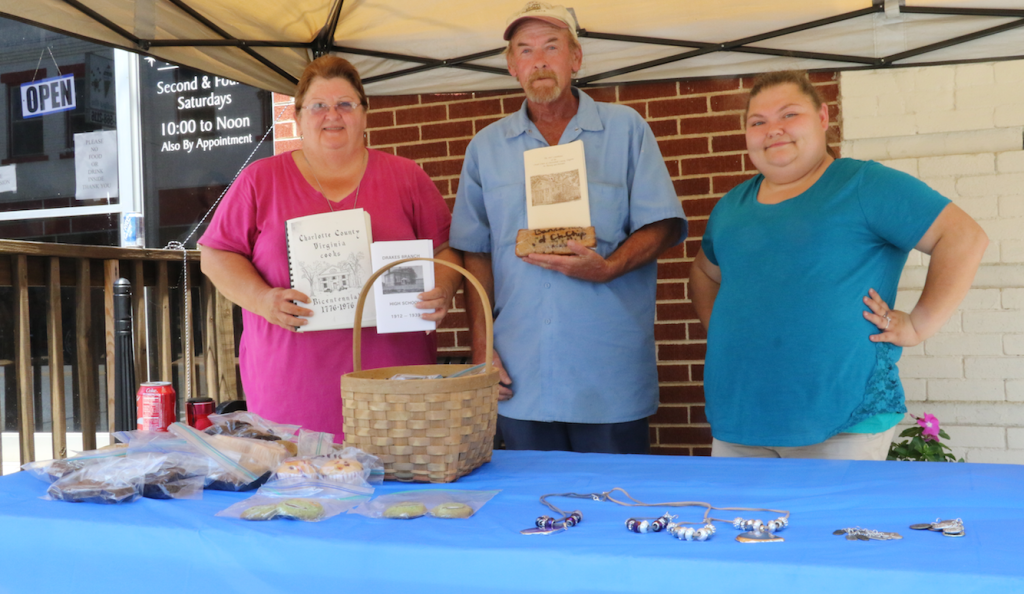 Bea King, left, and Mike Smith hold up items that were part of Friday’s sidewalk sale in Drakes Branch benefiting The Charlotte County Adopt-a-Cemetery Youth Members Project. Jessie Dunkley, right, stands in front of the table holding other items, including her handmade jewelry.

Those attending endured the remarkably warm weather and contributed hundreds of dollars to the Adopt-a-Cemetery initiative, which is part of The Charlotte County Cemetery Project of Virginia (CCCPV). The CCCPV helps to clean up and maintain cemeteries in the county while also teaching its adult and youth members about the inscriptions and symbols on the tombstones.

“I’ve had people calling me with donations,” King said, adding that one woman donated bug spray, which is greatly appreciated by project members who work on the cemetery grounds.

Including the donations made over the phone, King said the sidewalk sale raised $473.50 for the Adopt-a-Cemetery initiative, helping to pay for water bottles, sunscreen, bug spray, gas for the weed eater, paper, snacks and more.

“This is something the youth members wanted to do today,” she said of the sale.

All nine of the project’s youth members were on hand Friday morning for the event which ran 10 a.m.-3 p.m.

Society librarian Linwood Davis came later in the day dressed up as Drake the Clown.

“We sold brownies, cookies, breads, recipe books, jewelry,” King said. “… We had a lot of stuff. We sold a lot.”

“We reprinted it, and we have really been selling these,” King said.

The society also sold booklets about the former Drakes Branch High School. The booklet shares some of the institution’s history, providing class photos and researched information on students who attended there.

“It’s full of genealogy — full of it,” King said. “It’s a wonderful book. And we reprinted it, and a lot of people have been buying it.”

Jewelry for sale was handmade by society secretary/treasurer Jessie Dunkley, who had been a youth member of the CCCPV and is now one of its 15 adult members.

There are nine youth members of the project, with the youngest being 9 years old, and they come from a variety of places.

“We only have two that’s from Charlotte County, and they just moved here from Colorado,” King said. “The rest of them are from Nottoway, Campbell County, Prince Edward, Halifax, but only two from Charlotte.”

The Adopt-a-Cemetery initiative was started about seven years ago by Brittany Austin when she was 9. A granddaughter of King, Brittany was helping her clean cemeteries as early as age 6.

“She learned how to add and subtract, she learned the symbols on (tombstones),” King said. “She can tell you anything about a cemetery. She’s 16.”

Dunkley said, “The cemetery project got me into genealogy.”

She noted that as she worked in the cemeteries, she wanted to learn more about the people buried there, how they got there and who was related to who.

“If you go over here to Ash Camp in Keysville, on the back of some of the tombstones, you’ll see that they listed all of their family members,” King said. “That’s part of genealogy. You can learn so much.”

King said the purpose of the CCCPV is to give young people “respect for cemeteries, to get people to adopt abandoned cemeteries. It also gets them outside, it gets them to meet new people, learn the symbols on graves. Plus at the end, after so many hours, we give them a certificate of completion. Plus, we give them recommendations for college. But they have to do so many hours.”

Youth members typically accompany King to a cemetery every weekend throughout much of the year.

“It gives them a chance to give back,” Dunkley said.

King said she is planning another fundraiser for the Adopt-a-Cemetery initiative that will happen soon at the Charlotte County Farmers Market in Drakes Branch.