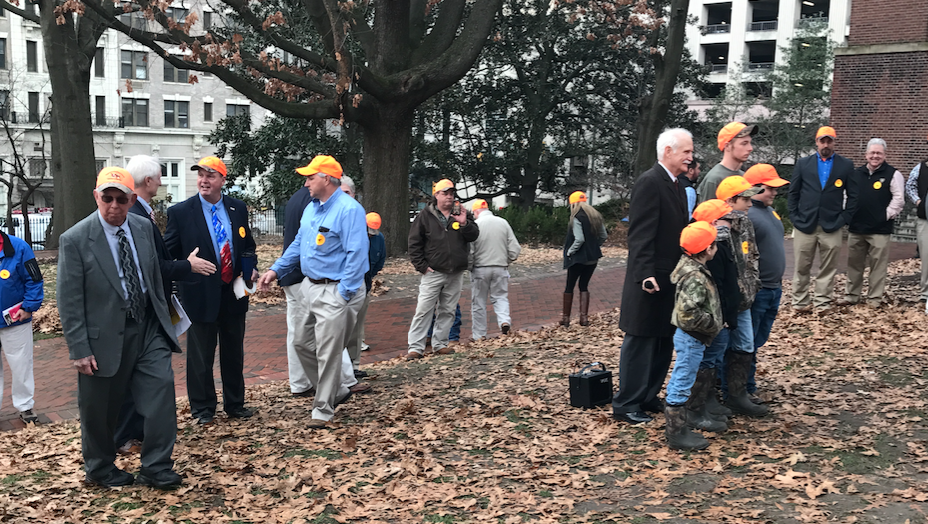 “Your participation sends a message that you care, that you are watching and you do pay attention,” H. Kirby Burch, the CEO of the Virginia Hunting Dog Alliance, told the crowd as the rally began with a few hoots and hollers from the members.

By Tyler Woodall and Julie Rothey

About 150 hunters and members of the Virginia Hunting Dog Alliance turned out at the Virginia Capitol on Tuesday to show their displeasure with a bill that would fine the owners of dogs that trespass on other people’s property.

House Speaker William J. Howell, R-Stafford, is sponsoring HB 1900, which would impose a $100 fine if a dog runs at large on property where the owner has given notice verbally, in writing, by placing signs or by marking trees with blue paint on the property line.

“Your participation sends a message that you care, that you are watching and you do pay attention,” Burch told the crowd as the rally began with a few hoots and hollers from the members.

Peake guaranteed the crowd that he will vote against the bill if it makes it past the House and will stand up to anyone to protect hunting rights.

Sili said the bill is flawed. “A point that is lost in all of this,” he said is that “law enforcement is not prepared to take on what this is going to cause, because it will become a tool amongst neighbors who don’t like their neighbor’s dog in their yard. It’s not just a hunting issue.”

Nearly all the speakers said the bill is wrongfully aimed at hunters.

“I have no redeeming graces for the bill,” Burch said in an interview after the rally. “It is a bill to do harm because someone has an agenda.”

Users of hunting dogs “want people to understand we’re God-fearing, law-abiding citizens,” Burch said. “We’re not rednecks, we’re not troublemakers and we care about our animals.”

“You cannot fault the whole deer hunting community because of the actions of a few people,” Miller said.

HB 1900 is awaiting action by the House Rules Committee, which Howell chairs.

Under current law, it’s a misdemeanor to intentionally release dogs on another person’s land to hunt without the consent of the landowner. However, finding a dog on another’s property is not enough evidence to prove the intentional release of that animal.

“The ‘right to retrieve’ law is an unconstitutional law,” said Donald Wright, a landowner in the town of Virgilina in Halifax County. He supports HB 1900, saying the bill “restores property rights to people like me.”

The Virginia Hunting Dog Alliance argued in a press release that conversations need to happen between neighbors before regulations are introduced. But Wright, a hunter himself, said he has tried that.

“I’ve been told, ‘You’re not from around here, you’re the problem, get used to it,’” he said. Wright stressed that he doesn’t want to see dog hunting done away with. “It’s just the bad apples.”

Landowners have complained about hunting dogs on their property, and hunters following them, in the past. The Virginia Landowners Association is pushing for stricter licensing regulations for dog hunters.

“I’m not able to enjoy my land. There’s dogs on my property almost every day,” Aaron Bumgarner, executive director of the landowners association, said in an interview with the Tidewater News. “I can’t take my own two dogs out on my land without conflict during the general [hunting] season and even during spring turkey season.”

From July 2014 to June 2015, about 5 percent of hunting complaints in Virginia involved dogs, according to the Virginia Department of Game and Inland Fisheries.