Staying off roads for weekend urged by VDOT 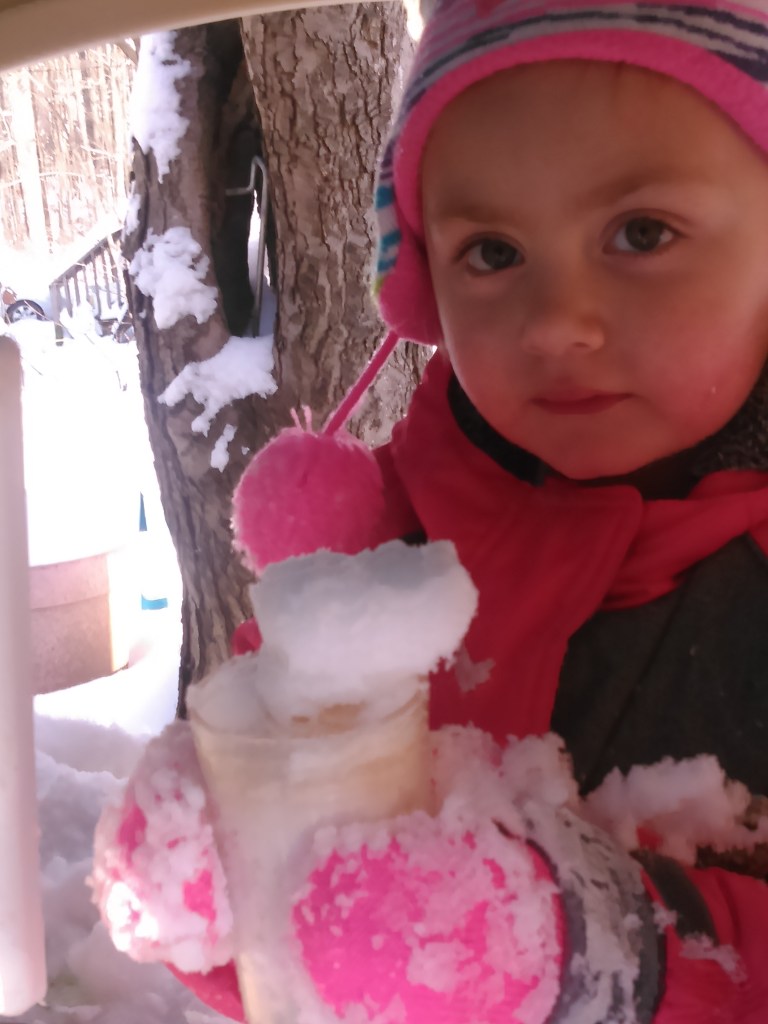 Three-year-old September Tharpe, in Drakes Branch, cooks up some snow.

Motorists are urged to stay off the roads through the weekend in the Heart of Virginia and statewide as the Virginia Department of Transportation (VDOT) and contract crews work to treat or plow nearly 58,000 miles of roadway. While the entire state is impacted with snow to the west and south and icy conditions to the north, the hardest hit areas are central Virginia, the Hampton Roads region and the eastern shore, where many roads are in severe condition.
Virginia State Police (VSP) troopers remained busy Saturday evening as the temperatures continued to drop and roadways remained frozen. “Virginians are encouraged to avoid traveling overnight and on through tomorrow morning due to the continuing and very serious threat of black ice and treacherous road conditions,” state police said in a press release. “Any roads that thawed earlier today due to being cleared will refreeze tonight. Stuck, disabled vehicles continue to be the greatest problem on Virginia’s highways.”
Slick road conditions were a causative factor for a fatal crash in Greene County on Saturday afternoon.

As of 6 p.m. Saturday, State Police have only one reported traffic fatality. Fortunately, the majority of crashes have involved only damage to vehicles.
From midnight Saturday through 6 p.m. Saturday, VSP have responded to 527 traffic crashes and 686 disabled vehicles statewide. During the same time period, VSP have received a total of 2,082 calls for service.
As of 6:15 p.m., troopers were still on the scene of 16 traffic crashes and 23 disabled vehicles statewide.

In a release, VDOT provided several guidelines for motorists.

“Driving conditions are treacherous,” agency officials said. “It’s best to stay off the roads through the weekend.”

Across much of the state, interstate and primary roads are mostly in moderate condition or snow covered, particularly in the southern half of Virginia. Moderate condition means that icy patches or snow could cover major portions of the roadway. Secondary and subdivision streets are snow covered and treacherous.

In Charlotte County, all roads are in moderate condition due to snow or ice.

According to VDOT, as people attempt to drive in the snow, there will be more spin-outs, and many motorists are not driving to conditions. “If you must be out, take it slow, leave ample room between your vehicle and the one ahead of you, do not brake suddenly and make sure your car is in safe winter driving condition. Tires with good tread is critical,” VDOT officials said.

VDOT crews are focusing efforts on interstate and primary routes before treating and plowing roads on secondary and subdivision streets.
Low temperatures will slow snow removal efforts and even when secondary roads and neighborhood streets are plowed snow will remain frozen on the road surface.
VDOT officials say when clearing your driveway, shovel to the right. This will cause less snow to be plowed back into driveways.
Monitor road conditions by visiting www.511virginia.org.
If you need more information or report a specific road-related problem, visit https://my.vdot.virginia.gov/ or call 1-800-FOR-ROADS.