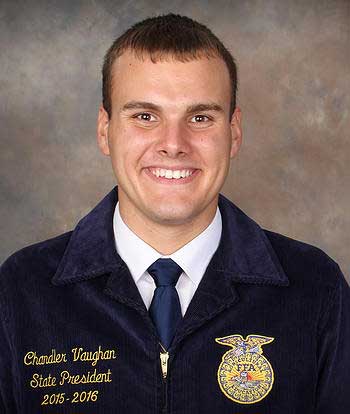 James Chandler Vaughan, a Keysville resident who is the former state president of the Future Farmers of America (FFA), nearly became a national FFA officer recently. Vaughan said he was nominated in May, and traveled to the 89th National FFA Convention and Expo in Indianapolis, Ind., last week.

Although Vaughan was not selected as a national officer for the 2016-17 year, he reflected on his journey leading up to his nomination.

“My position as a state officer concluded this past June at the Virginia FFA State Convention,” Vaughan said. “During the year, I traveled over 27,000 miles around Virginia visiting FFA chapters to engage students in workshops and deliver speeches on topics ranging from advocacy to leadership.”

Vaughan said he began preparing after learning he had been nominated as a national FFA candidate.

During Saturday’s ninth general session, 2015-16 National FFA President Taylor McNeel said, “the individuals running for the offices have undergone an intense interview process where they were evaluated on their ability to conduct workshops, deliver speeches and answer questions about FFA agricultural education, the agricultural industry and the issues which it faces.”

According to the National Officer Selection Process Handbook, “the primary responsibility of a national officer is to serve. When you become a national officer, you agree to dedicate one year of your life to service with the organization.”

The handbook said a total of six new officers are selected each year to serve as a national officer.

“This year, they will travel over 100,000 miles, serving as an advocate for agriculture and engaging over 649,000 FFA members across the country,” Vaughan said.

Throughout his time as state president, Vaughan said he experienced several instances in which the FFA served as a community for growth.

“I watched a student this past year transfer school systems during the middle of their junior year in high school,” said Vaughan. “She was nervous about the transition. However, once I told her that the other school had an FFA chapter, she felt more comfortable with going to the other school. I saw that FFA provided her a community that meant an immense amount to her, even when she was facing switching schools.”

He said the newly selected members of the National FFA are from Delaware, New York, Florida, South Carolina, Texas and Minnesota.

Vaughan is a 2015 graduate of Randolph-Henry High School.