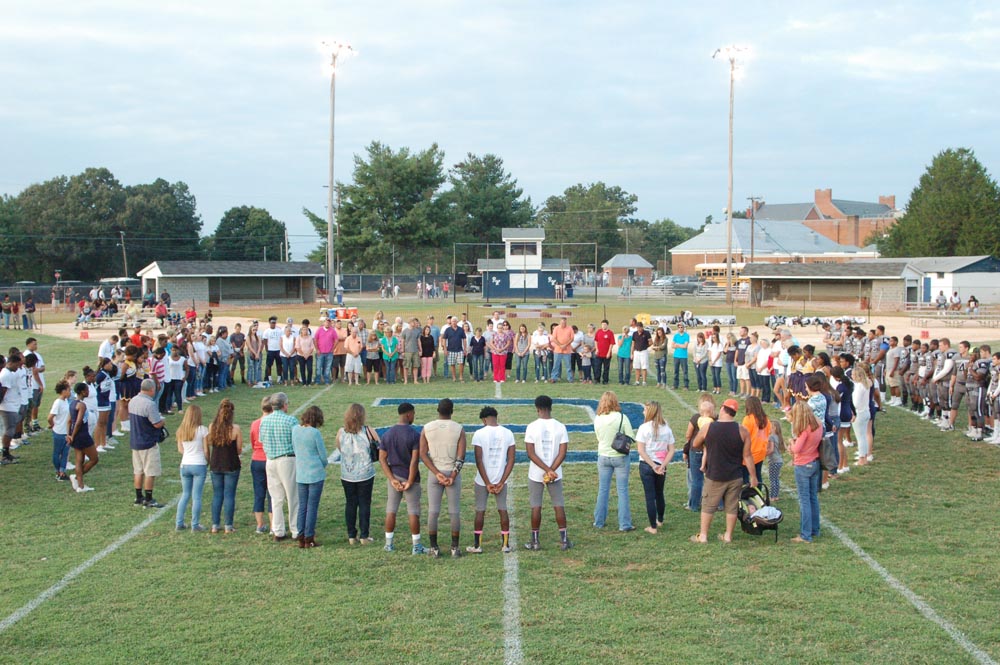 Photo by Titus Mohler Family and friends of Colton Osborne publicly remember him at midfield during a brief ceremony prior to Friday’s home opener for Randolph-Henry High School’s varsity football team. They stand gathered around a giant “2” painted on the field. That was the jersey number of Osborne, the recently graduated Statesman who died in an ATV accident Aug. 27.

Friday night was far more than just the home opener for Randolph-Henry High School’s varsity football team. It was an opportunity for family and friends of Colton Osborne to publicly honor and remember him.

Osborne, a multi-sport athlete who graduated from Randolph-Henry in May, died in an all-terrain vehicle crash on Aug. 27.

In his memory, a giant “2” was painted in the middle of the Bankston Field gridiron at the 50-yard line. Osborne wore No. 2 both as a football and baseball player for the Statesmen.

Just prior to the game, anyone who wanted to be part of the remembrance ceremony was invited to midfield. Randolph-Henry Athletics Director Chris Holt estimated 40 or more members of Osborne’s family and his closest friends gathered around the “2,” and they were joined by about 300 other people, including cheerleaders and players from Bluestone High School, the Statesmen’s opponent that night.

“He was such a big part of Randolph-Henry, and his tragedy occurring so close to graduation, it still feels like he’s a part of us,” Holt said of Osborne. “And to be able to remember him tonight, to honor him tonight, for his family, for our students … to gain some closure here at Randolph-Henry, I thought, was important. We just wanted to do it, and we wanted to do it right.”

“I was blessed to have the opportunity to know him for one year,” McPherson said after the ceremony. “I just know that his attitude and the way he carried himself and his smile and things like that were contagious to everybody else.”

Following the presentation of the jersey, the Randolph-Henry choir — newly formed for this occasion — sang a song it had selected.

“I know they all loved Colton,” Teresa Osborne said of the people gathered at midfield.

Though it is a difficult time, she said she was glad she and her husband came to the remembrance ceremony.