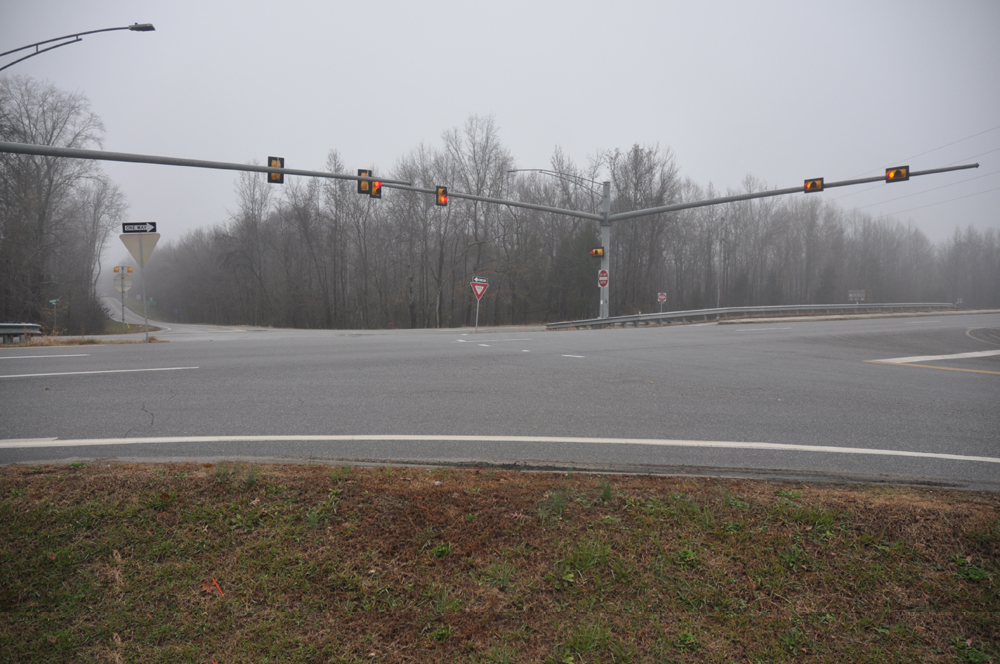 Photo by Italia Gregory Stoplights will be installed at Crafton’s Gate intersection, where U.S. 360 and Route 47 meet, in Charlotte County. The project was approved for funding after scoring high on the Virginia Department of Transportation’s new “SMART SCALE” system.

The Crafton’s Gate intersection, located at U.S. Route 360 and Route 47, will have stoplights installed in the near future, according to Virginia Department of Transportation (VDOT) Resident Engineer Scot Shippee.

Motorists and county residents have voiced concerns for years about the safety of the intersection, which has been the scene of numerous traffic crashes.

“A couple months ago, VDOT, along with Charlotte County Board of Supervisors, county administration, state police, the Charlotte County Highway Committee, the Commonwealth Regional Council and our consultant … put together a safety assessment to take one look at this intersection to try to find a best solution for everybody,” Shippee said during the board’s Tuesday meeting.

“Ultimately — and this was just released very recently — after taking a look at this, we had several meetings and several options we looked at. We ended up with a two-tier recommendation. The immediate improvement that is being recommended is that traffic signal being installed at the Crafton’s Gate intersection, with the understanding that as a long-term recommendation apart of a potential corridor-wide improvement whenever traffic volumes and traffic movements warrant it.”

The long-term recommendation is also referred to as a Restricted Crossing U-Turn (RCUT)/J-Turn intersection.

“It is where, basically, you are forcing traffic to make U-turns. If they are coming off of (Route) 47, they would go down (Route) 360, make a U-turn and go back up. It basically does not allow folks to cross the median. So, that would only be a solution in the long term and only if we were doing two, or maybe three, intersections at a time,” said Shippee.

“The good news for you guys is that the improvement that we are looking at doing now is to install a traffic signal there. We will be doing that, and this should be funded through that successful SMART SCALE project, which was adopted by the Commonwealth Transportation Board.”

“I tell ya, I think this is long overdue,” Hamlett said.

In June, Shippee told supervisors the intersection project had scored high on the agency’s new SMART SCALE program, and the project had been approved for funding for safety improvements. SMART SCALE rates projects considering factors affected like improvements to safety, congestion reduction, accessibility, land use, economic development and the environment.

Crafton’s Gate intersection received a high score of 19.8 on the program, ranking 27 of the accepted 287 projects. According to VDOT’s study of the intersection, during a 12-hour turning movement, total entering volumes were fairly consistent and ranged from approximately 425-725 vehicles per hour.

From February 2010 to November 2015, there were a total of 16 crashes at the intersection, resulting in 19 injuries.

“There has been so many studies and so much money spent down there to try to help that situation, and in some people’s minds, it looked liked it hindered things more than it helped,” said Aspen/Phenix Supervisor and Board Chairman Haywood Hamlet. “We have felt like, for some time, that a stoplight would be the answer. It is now in the works. I just hope that this is going to eliminate all the confusion that is happening down there now.”

Shippee didn’t offer a specific date for the installation of the new traffic signal.