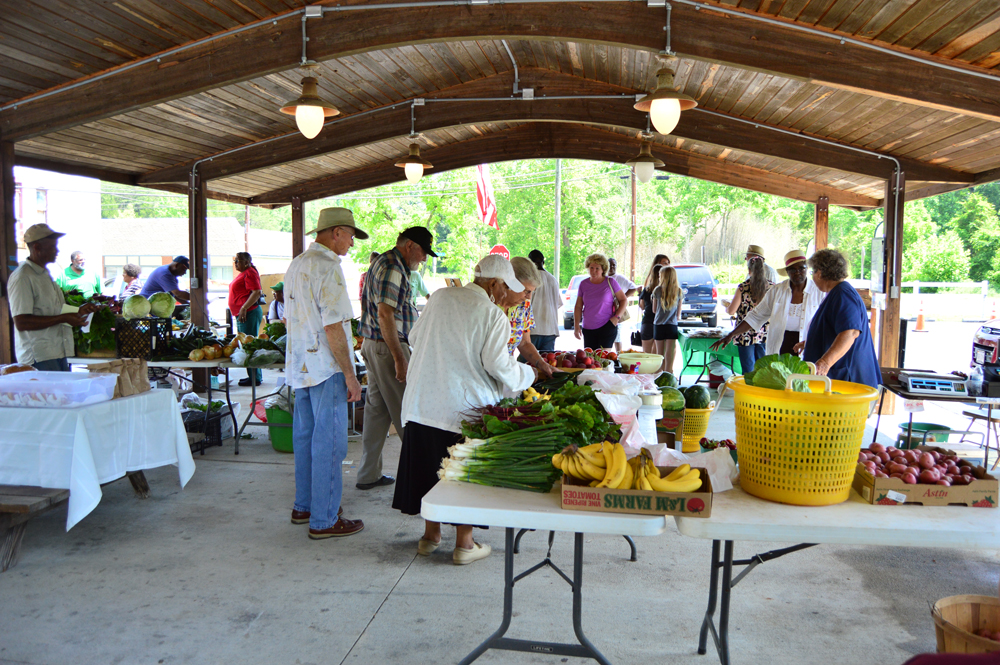 (Photo by Halle Parker) The recently established farmers Market in Drakes Branch will run from 10 a.m. to 4 p.m. every Friday.

Starting Friday, the market will shorten the time it runs by two hours, going from 10 a.m.-4 p.m., after noticing the number of consumers slow down in the final stretch, according to Bob Jones, a Charlotte County extension agriculture agent.

Since opening on May 13, Jones said the number of customers have steadily increased, allowing the market to sell an estimated $4,000-$5,000 as well as send customers to other businesses in town.

“The local support has just been unbelievable … and it’s really turned into more of a social thing,” said Jones, speechless at times as he described the progress. 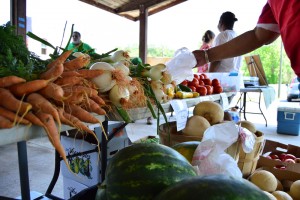 (Photo by Halle Parker)
Brick Goldman, manager of the farmers Market, sells a variety of produce over the course of the day.

Melanie Goldman, wife of Farmers Market’s manager and local produce vendor Brick Goldman, explained how since the start, new vendors would visit the market to inquire about a spot.

Both Jones and Goldman expressed the potential for the market’s expansion by incorporating food vendors every Friday, occasional live music and fundraisers for local churches and youth groups.

“We want to make it an event for people,” said Jones.

In order to make the location more comfortable, Roscoe Eubanks, Sr., a town councilman, suggested the installation of three fans to the pavilion ceiling during Monday evening’s town meeting, a motion that passed unanimously.

Amidst the crowd between vendor tables, Goldman believed, joined by Jones and Drakes Branch mayor Denise Pridgen, the farmers Market may stay open during the colder months and move indoors giving it the opportunity to exist year-round.

On June 3, Jones said the market gained two new vendors, including John Graham of the Graham Bass Fish Farm based in Bedford, Va. who sold different types of fish. Graham hadn’t heard of the farmers Market until Brick Goldman promoted it while they both were selling at the market in Forest, Va. and said he was “always looking for new markets.”

Outside of word-of-mouth promotions, Beth Reynolds, one of the market’s board members and an herbal product vendor, began a Facebook page listed as “Charlotte County Farmers Market at Drakes.”

After attending every week since the market began, Trinity Gospel Church pastor David Malcolm said he kept returning not only for the produce, but because he felt the need to put money back into the community.

“It’s supporting the idea that local business can be successful and thriving, so I kind of feel like it’s my responsibility,” said Malcolm.

“The Drakes Branch Town Council is very proud of the fact that the farmers market has got off to a great start,” said Eubanks. “It really has improved the town’s image, and it fits right into the Town’s revitalization program.”