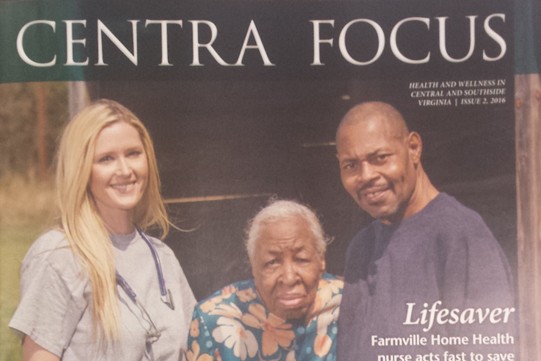 Kristin Tharpe, of Drakes Branch, has been featured on the front and inside of Centra Focus magazine this month.

The Farmville Centra Home Health RN was highlighted for her above-and-beyond passion for her job, and for the story behind saving her former softball coach, Michael Gregory.

According to the magazine, Gregory battles congestive heart failure, and his 97-year-old grandmother, Annie Gregory, also receives care from Tharpe.

In October, Tharpe made an unexpected visit to the Gregorys’ home to check on her patients. While there inside with Annie, Michael stepped outside to dump ashes from a wood stove and didn’t return.

After realizing that something must have happened because Michael was taking a long time to return, Tharpe went outside to check on Michael who was having a seizure.

Quickly, Tharpe called 911 and her husband, Kenny, who is the Drakes Branch Volunteer Fire Department chief. 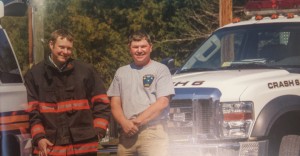 Tharpe began CPR shortly before paramedics arrived. “When I started CPR, I was worried how long I would be alone. But, within minutes the fire department arrived to help,” said Kristin. “The firefighters took over CPR while I assisted Paramedic Thomas Rothwell. We all had a sigh of relief when we got a pulse back.”

It was a big moment in Kristin’s career — one that she will remember for life.

“I’ve never been more proud of our small community as I was that day,” Kristin said.

Kenny elaborated on the small-town feel that the department faces on a regular basis.

“Being one of only two out of the seven fire departments in the county running medical (EMS) calls on a limited budget, many may wonder why we do it when it increases our call volume more than triple,” Kenny said.

“This one call answered all of that. While I did answer that call that day, there were many members involved. James Napier, Derrick Thompson, James Gordon and, of course, Thomas Rothwell. I would also like to give recognition to Aileen Cassada, our EMS captain. While she wasn’t on this particular call, she is responsible for the EMS side of the department and the reason we were able to be ALS (advanced life support). We all worked as a team that day and with the help of the good Lord above it ended well.”