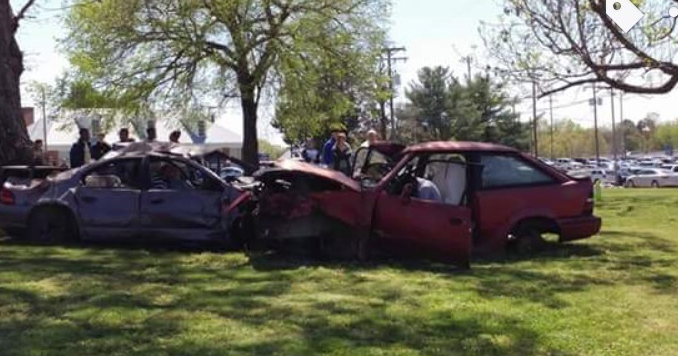 Randolph-Henry’s BLOG group facilitated a mock accident on the front lawn of the school to create awareness about distracted driving.

Motorists may have noticed a heavy emergency presence at Randolph-Henry High School, on Thursday, however, there was no emergency.

The school’s Arrive Alive campaign facilitated a mock accident on the front lawn of the high school.

According to Youth of Virginia Speak Out About Traffic Safety (YOVASO), “the goal of the Arrive Alive campaign is to increase awareness about the problem of teen crashes and fatalities during warm weather months, including prom and graduation season.”

The campaign kicked off on April 4 and will end on May 6.

The Randolph-Henry BLOG (Be Leaders of Our Generation) group facilitated the mock accident. According to club sponsor Karen Osborne, rescue responders from the Drakes Branch Fire Department, Charlotte Court House Fire Department, Charlotte Court House Rescue Squad, Charlotte County Sheriff’s Office, Virginia State Police and Lynchburg Centra Med Flight participated in the reenactment to make the event possible. She said students were given to opportunity to see the inside of the helicopter.

An instant alert sent out to parents from Randolph-Henry Principal Robbie Mason said rescue vehicles and a helicopter would be on the front lawn of the school to reenact an accident scene for students during the initiative.

“This is an effort to remind students of the potentially deadly consequences associated with distracted driving and drunk driving,” Mason said.

He said the school wanted to make parents involved of the reenactment so there would be no confusion if the emergency vehicles were spotted at the school.

“Thanks to Mr. Mason and his team for working so proactively to keep our children safe,” said Superintendent of Charlotte County Schools Nancy Leonard.

Osborne said while the group may not have reached all of the students at the school, she is confident that the message touched some.

“I wanted the students and faculty to feel the reality of seeing students deceased and seeing some being placed on a stretcher,” Osborne said. “Sometimes a reenactment opens of the eyes of the blind. I saw the tears in the eyes of some, so I know we reached some of them.”

Osborne thanked the volunteers who participated in the mock accident.