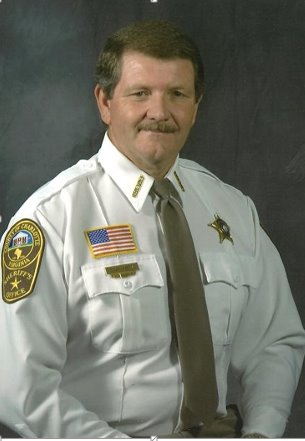 Not just in one county, or a few, but Charlotte County Sheriff Thomas Jones is the No. 1 senior sheriff in Virginia — a task that doesn’t come easy.

Jones received this title after reaching No. 1 on the Virginia Sheriff’s Association’s seniority list. Jones shares the title of current longest serving sheriff in Virginia (Nottoway County Sheriff Larry J. Parrish also became a sheriff on Jan. 1, 1988), but the difference is that Jones is right above Parrish because of his seniority number, which goes in alphabetical order when first assigned when one becomes a sheriff.

“It makes me feel great,” said Jones about his recognition and leading his department that is known for getting the job done.

“I am as proud as I can be, and what I am proud of is the dedication of the employees. I am just one person and I am supposed to be in charge and all, but they are the backbone of this department. If a job needs to be done, they are out there doing it night and day, 24 hours a day. It is just that they have a great working relationship with each other, and they support each other. I think that is the key to having a good anything — business or team.”

“I couldn’t even begin to tell you what the first day was like,” Jones said. “It was overwhelming, I guess you could say. There were just so many things that we wanted to do. There were no computers at all. We had one typewriter in the whole office that the secretary used. If she wasn’t using it, then the men shared it. Things have changed a great deal. A multitude of things since 1988.”

Jones said that about 15 days after taking office, the department moved into the new jail building and it had to transport inmates from Appomattox back to Charlotte County.

“It took a long time to get settled in and there were so many ideas running through everyone’s head about what we were going to do and what we wanted to do (in the new office),” said Jones. “The first thing we did was start the D.A.R.E. (Drug Abuse Resistance Education) program.

In September 1988, the school board and department worked together to purchase equipment for the program and it still operates today.

As time passed, Jones was offered another opportunity to represent his county.

“One of the special things that has happened to me since I have become sheriff is in 2006 I was elected President of the Virginia Sheriff’s Association,” he said. “That was a proud moment, and everything else has just kind of come together.”

Jones and his department continue to try and advance their systems of outreach and help. The department just opened a exchange zone for residents to safely meet to buy and sell yard sale items.

They also recently opened up a new website (www.cchsheriff.com) and created a Facebook page (Charlotte County Sheriff’s Office) for citizens to easily keep up with what is happening within the department. Charlotte County residents can even fill out a form on their website for home checks to be done by deputies when they are away from their homes.

Through challenging times like bank robberies to routine work that is done every day, Jones continued to credit his department for his accolades.

“Anything that is good that has come out of this department that I am credited with is because of the wonderful people that supported me — the wonderful staff, my family and the good Lord,” Jones said while holding back tears.

Jones is also a member of the Board of Directors of the Central Virginia Criminal Justice Academy and currently serves on the Virginia Sheriff’s Association board.

He is married to his wife, Pam, and has three children — Brian, Jeremy and Karen. Jones and his wife also have seven grandchildren.