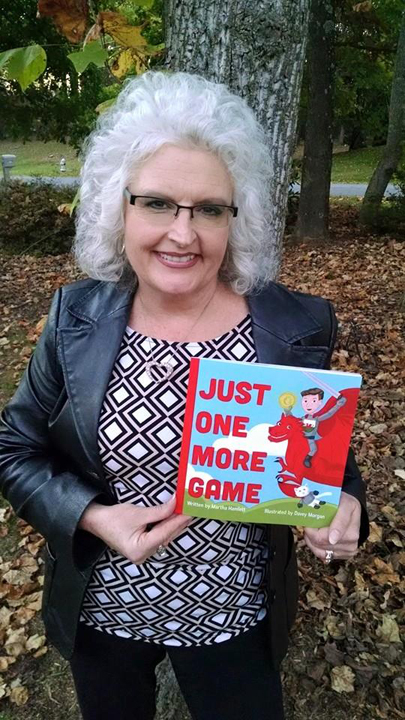 “I started writing in elementary school and I really got encouraged to begin writing in fifth grade,” Hamlett said.

“I had a teacher who would give 20 spelling words at a time and you had to know the definition. You had to be creative and she would make you write a story. I just really liked doing it and I kept writing from there.”

Hamlett says that she fell in love with writing poetry, but things changed after having her first child, Noah. After writing numerous tales and poems for her first-born, Hamlett decided that she wanted to try her hand out at children’s books.

“I decided that I wanted to take what I had written and put it in print. So, I started traditionally by trying to get it picked up on the normal routes,” she said.

“It was a little harder getting it picked up since some companies have in-house writers. I started doing my research individually and I met an illustrator (Davey Morgan) who would work with me. He was talented and he made it more simple.”

Morgan illustrated both books by Hamlett. Hamlett’s first story was a 2008 release titled, “Bats in the Air, Bats in My Hair.”

Hamlett says this book is just like the first as it tells a life story.

“Just One More Game” tells the story of a boy named Corey who is so into playing video games that he will not eat, sleep or play with his friends.

He continues to play the game in hopes of reaching Level 10, even though his family and friends are upset with him.

After being sent to bed, he dreams of being in the game and reaching his goals, then wakes up to realize how obsessed he has been with the game.

Hamlett, who currently resides in Lynchburg, has worked the last 32 years at Babcock & Wilcox. When she is not working at the energy and environmental services industry, she takes time to write children’s books — not just one or two, but more.

Hamlett’s book can be purchased at Amazon.com and Barnes and Noble.

Since releasing her first book, Hamlett has been invited to read her book at several elementary schools, including Eureka Elementary School. She welcomes the idea of returning to Charlotte County once again to read to students, if invited.

“For me, the most rewarding part of writing these stories is going to read at the schools,” she said.

“I love reading and interacting with that age group, the kindergarten to second grade age range — just seeing and trying to spark that bit of creativity in them.

To contact Hamlett or to set up a class reading of the book, those interested can email Hamlett at martha@webovations.net.

Church and Community Events for the week of Nov. 23

Church and Community Events for the week of Nov. 16