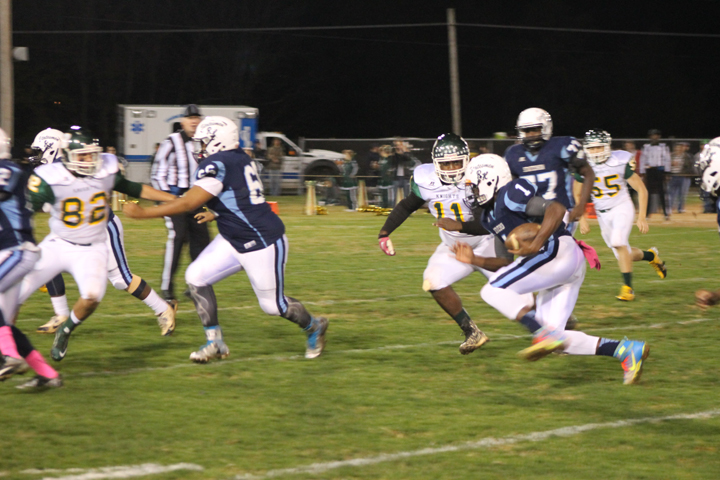 The Statesmen’s opening drive ended in a fourth-down fumbled punt attempt that gave the Knights a first and 10.

Five plays later Knights running back Leon Ragland ran the ball in for a touchdown. He would then go on to score four more times in the first half.

The Statesmen’s intial first down of the game came on a third-and-long pass to Dajour Davis and three plays later Statesmen quarterback Joseph Reed broke through for a 35-yard run into the end zone.

Buckingham took control for good as the Statesmen couldn’t overcome a series of incomplete passes and sacks.

Buckingham opened the second half with a touchdown and Randolph-Henry tried to capitalize on a Knights personal foul during the Statesmen kickoff return.

However, the Knights intercepted a Reed pass and returned the ball 80 yards for another touchdown.

The Statesmen hung on and added a touchdown of their own when Chris Powell crossed the goal line and a successful extra point attempt saw the score improve to 42-13.

Before the game ended, Buckingham added another 20 points to the scoreboard.

“We have to regroup and stand tall,” R-H football coach Mark McPherson said. “Of course this isn’t what anyone wants on Senior Day. You have to take this and learn from it.”

The coach told his players, “I want you, and our seniors to finish strong. We can’t dwell on this. They aren’t better than we are.” McPherson said.

The Statesmen will travel to Nottoway on Friday at 7 p.m. for their final game of the regular season.

The loss effectively eliminates the Statesmen from any playoff contention.

For more information on ABC 13’s Player of the Year Watch List or to vote for Reed in the competition visit ABC’s football Facebook page (ABC 13’s Football Friday).