Expect heavy Amish traffic today. Why? An event in Buckingham 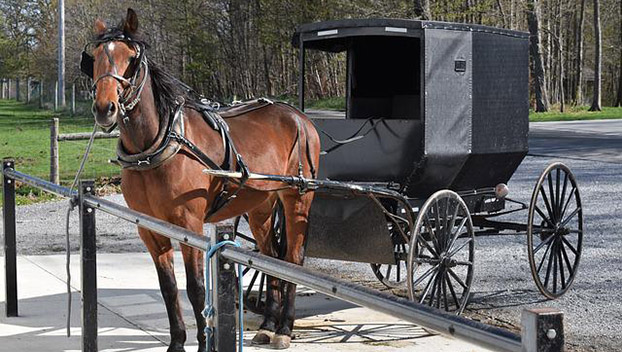 Drive slowly on the roads today in Charlotte County, especially around curves. That’s the warning from the Toga Volunteer Fire Department in Dillwyn. The reason? A large Amish wedding will be taking place, at the Amish store at 18364 E. James Anderson Highway.  As a result, the amount of Amish traffic will grow in Charlotte and the surrounding counties, with more buggies on the roads.

“We’ve been advised by our Amish fire members that 450 people are expected to attend,” the Toga firefighters said in a statement. “(They’re coming) from Buckingham, Cumberland, Prince Edward (and) Charlotte counties and farther south, as well as from Maryland, New York, Kentucky, Indiana and Pennsylvania.”

Due to the wedding, residents can expect heavy buggy traffic, much more than usual, firefighters said. While Amish from around this region will be bringing their horses, those from out of state will be brought in through a series of vans.

Toga officials said they’ve been told local buggies are expected to be on the road as late as 11 p.m. The Amish store on James Anderson Highway will be closed to the public during this time. But don’t be surprised to see the parking lot packed with buggies and vans as you drive past.

In a case like this, warnings are issued now, due to risks on the roads. In October 2021, a pickup truck hit an Amish buggy in Cumberland County, killing two parents and injuring their eight kids. Before that, in September 2020, an Amish buggy pulling a wagon was hit from behind by a car in Buckingham County. Fifteen people, ranging in age from 35 to 5 months, were injured.

The Charlotte County Sheriff’s Office said they’ve seen 3 to 4 crashes over the last five years. Currently in Charlotte County, it’s not a requirement for Amish buggies to always have flashing lights on.

That’s why the warning was issued for today, both to avoid accidents and also to prepare other drivers to expect delays, due to the sheer number of Amish buggies on the roads. The Toga staff offer up some recommendations on how to deal with buggies.

First, don’t pass unless you have a clear view around the buggy, preferably a passing zone. They also ask that you don’t tailgate, rev your engine or blow your horns while passing.

Now when you see a buggy on the road, slow down and allow for some extra braking distance. This is especially true in the morning hours, when the pavement could be damp from dew.

The Buckingham County Sheriff’s Office also say that message boards will be put up on Route 60. This will be to remind people to use caution.

“They plan to leave this evening before dark, but some will still be out around 7 p.m. to 8 p.m.,” said Buckingham Lt. A. Jamerson. “The buggies do have lights and reflectors, but drivers should still use caution.”