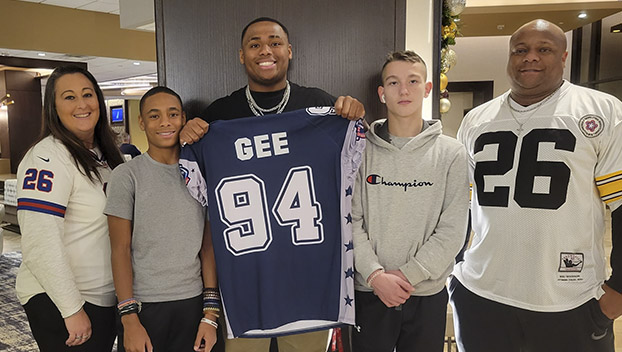 Gee displays his football jersey with his family.

During his time on the field, Gee played defensive tackle position.

Gee, who started in the game, made several big tackles for a loss, sacks and was in the backfield most of his plays.

Gee was invited to participate in the High School All-American East-West Bowl after attending the regional combine at the Washington Commander’s practice field in Richmond in June.

From that combine he was one of two that were picked from Virginia to attend the Blue-Grey bowl.

Gee led the R-H Statesmen in tackles with 107 avg 10.7 a game he finished the season fourth in the Class 2 Region and was 14th in the state.

In addition, Gee was awarded first-team All-District Defensive line and second-team Offensive Line as a senior.

As a Junior, Gee was awarded the first-team All-District Defensive line and was the only one to represent the Statemen.

“We are very happy and proud of Jayden (Boogi) on all his accomplishments in football and pray that wherever God leads him after this wonderful experience, he will be successful,” said Gee’s parents, Jodi and Mac Gee. “Boogi represented the Gee Family and Charlotte County very well on this big stage only to be a high school student.”

The High School All-American East-West Bowl can be viewed on impactfootballnetwork.com or search blue grey football Dec. 19 game on YouTube. Gee’s number is 94.