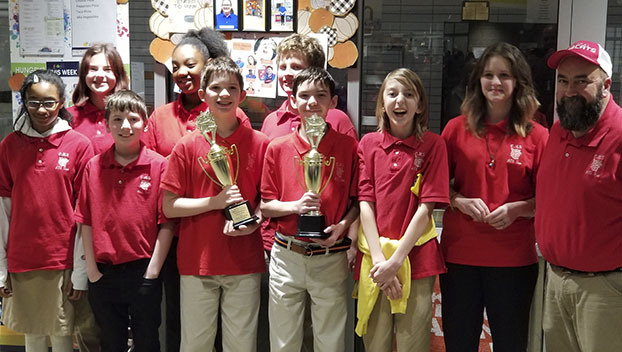 For the second straight year, the Central Middle School (CMS) ACE Team won the Southside Middle School Conference ACE tournament. On Nov. 16, at Powhatan Middle School, CMS won the championship over three other schools in the final-four championship round. With eight wins and only one loss, the Bobcats won first place for the most matches won. In addition, the team also won the championship trophy for most points over the course of the three-night event, with 1811 points. Mecklenburg Middle came in second and Powhatan finished third.

ACE stands for Academic Challenge of Excellence. The matches are similar to Jeopardy, in which students from opposing teams try to out buzz each other, answering questions involving history, math, science, literature, and popular culture. Another unique feature to middle school ACE is that there is a two-minute vocabulary round. In this round, students work in teams of four, and have two minutes to determine the terms to 25 definitions. The only information they know ahead of time is that all the terms begin with the same letter. They are told the letter just before they start to work.

ACE competitions were hosted at Powhatan Middle School, twice in October and once in November. Only the top-four teams in most points were allowed to return for the last night of the tournament, on Wednesday, Nov. 16.

The CMS ACE team practiced about three times a week, for about an hour and 45 minutes each time. The team consisted of a few returning key eighth graders from last year’s championship team. There were also many new faces this year from sixth and seventh grade.

The amount of dedication and time put into the effort was impressive. Students loved to come to practice each day, where it was a lot of fun sharing time and building relationships with fellow Bobcats. That enthusiasm translated over to intense pride in wanting to do their best on competition day. The team was very disciplined in how it understood how to play the game from a strategic level. There’s more to ACE than just pushing the button on the buzzer.