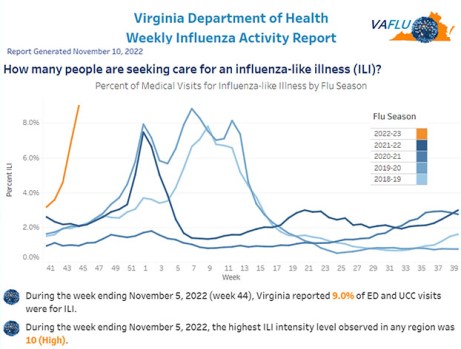 The number of flu-related hospital visits in Central Virginia is on the rise. State health officials say we’re seeing numbers higher than they’ve been in a decade. 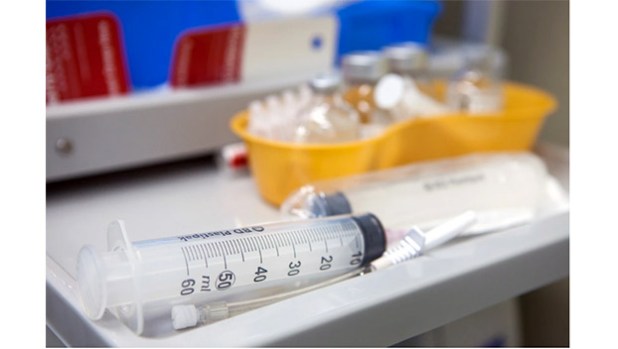 Take precautions. That was the warning Monday for Charlotte County and the surrounding region. The Virginia Department of Health’s Piedmont District issued a statement, saying the hospitalization rate for flu in the region is the highest it’s been since 2010-2011 for this time of year.

Piedmont District Health Director Dr. Maria Almond said the VDH reported a steep rise for the week of Nov. 5 as 9% of emergency department and urgent care center visits were for influenza-like illnesses with the highest in the state recorded at 10%. Charlotte, Lunenburg, Cumberland and the rest of the Central region recorded 8% of ER visits were linked to the flu.

The VDH also reported that the largest proportion of visits for age groups was those ages zero to four years old, making up 21.4% of the visits. This can be seen in the spike in suspected or confirmed outbreaks for daycare and pre-kindergarten to about 28% compared to the previous week when it was the same as kindergarten through 12th grade at around 19%.

These high numbers are believed to be a result of the COVID-19 pandemic as many folks have lost their immunity to the flu as they took extra precautions and traveled less due to the lockdowns.

“During the pandemic, a lot of people became aware of the COVID-19 virus and many didn’t get the flu vaccine or encounter the flu as we didn’t really see much activity,” said Lisa Sollot, VDH respiratory disease coordinator in the division of surveillance and investigation.

Fortunately, even with the high numbers, as of Nov. 10, the VDH has reported no influenza-associated pediatric deaths or pneumonia, influenza or COVID-19 associated deaths for the 2022-2023 flu season. 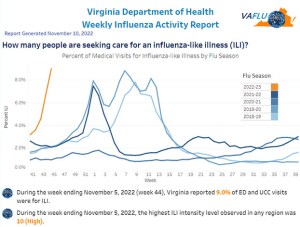 HOW TO PREVENT THE SPREAD

According to the Center for Disease Control (CDC), the first way to protect people can protect themselves is by getting their yearly flu vaccine. The CDC now recommends that everyone ages 6 months and older to get their annual shot.

“An annual flu vaccine is the best way to protect against flu,” said Almond. “Vaccination helps prevent infection and can also prevent serious outcomes in people who get vaccinated but still get sick with flu.”

Unlike COVID-19, the flu is much easier to slow and prevent the spread. Routinely cleaning surfaces is an easy and effective way for people to prevent themselves and others from catching and spreading the virus.

“Flu viruses are fragile, so standard practices, such as cleaning with soap and water, can help remove and kill them,” said Almond. “Studies have shown that the flu virus can live and potentially infect a person for only two to eight hours after being deposited on a surface. Therefore, special sanitizing processes beyond routine cleaning, including closing schools to clean every surface in the building, are not necessary or recommended to slow the spread of flu, even during a flu outbreak.”

An easy way to prevent infection is to make sure to wash hands often for at least 20 seconds with soap and water. Also, refrain from touching eyes, nose and mouth as this is an easy way for germs to spread. A great way to protect others is to stay home when showing symptoms. The CDC recommends staying home at least 24 hours after a fever is gone.

These practices can help slow the spread of the flu and other illnesses making their rounds this flu season.