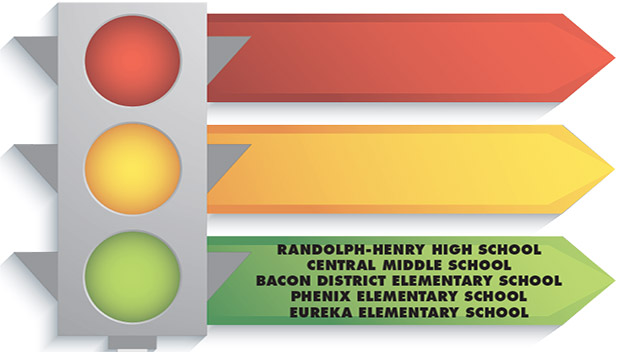 By Brian Carlton and Crystal Vandegrift

When it comes to the classroom, Charlotte County schools don’t have a problem. In the data released Thursday, Sept. 22, the district met or exceeded state standards in most areas, receiving full accreditation at every school. And even in the few places they didn’t meet state standards, the numbers were just slightly off the state rate in one subject. Charlotte Superintendent Dr. Robbie Mason said teachers started very early in the school year to address any potential issues.

“Our teachers employed student data early in the 2021-22 school year to identify areas in which students were deficient,” Mason said. “Once those areas of weakness were identified, teachers retaught specific concepts in conjunction with current grade-level standards.”

He added that both individual and group remediation happened frequently to reinforce concepts that proved difficult for students.

Based on the current data, that practice worked in Charlotte County, as virtually everything is at or above the state standards.

HOW ARE SCHOOL DISTRICTS ACCREDITED?

The Virginia Department of Education decides if an individual school is accredited, or meets state standards, based on six categories. The state looks at a school’s English pass rate, English achievement gaps, math pass rate, math achievement gaps, science pass rate and if there is chronic absenteeism. If a school doesn’t meet state standards for multiple years, then the Department of Education steps in to help determine what’s needed to address the issues.

Now there are a few exceptions. Elementary schools, for example, aren’t judged on science pass rates because that test is first given in the fifth grade. And to give schools one more year to adjust post-pandemic, the state isn’t including chronic absenteeism in this year’s assessment.

It’s also hard to even come close to a “perfect” score, when it comes to accreditation. Each school receives a “quality rating” of Level One, Two or Three. Level One means you meet or exceed the state standards. Level Two means you’re showing improvement, but haven’t quite got there yet. Finally, Level Three means there are issues, as the school is performing below state standards.

RANDOLPH-HENRY CHECKS ALL BOXES BUT ONE

In the classroom, Randolph-Henry High School students excelled across the board. The school’s pass rates exceeded state standards in math, English and science, with no reported achievement gaps in any subject. There were also no issues with graduation or dropout rates.

With no achievement gaps identified or other issues in the classroom, Randolph-Henry had just one thing stopping it from reaching a perfect score. Basically, some students aren’t showing up for class. According to the state data, 29.51% of students at Randolph-Henry are chronically absent. We’re not talking about missing one or two days of school. Chronic absenteeism is defined in Virginia as missing 10% or more of the school year, regardless of the reason.

Other schools in the district also showed growth in multiple areas, with a couple exceptions. At Central Middle School, 80% of students passed English and 89% passed math. The problem was in science. Only 60% of students at the school passed the science test. That’s below the state standard of 70%.

The only other issue at Central Middle comes outside of the classroom. A total of 26.43% of Central Middle students were declared as chronically absent by the state. As with Central High, that can be for any reason. Even if they have permission to be out, that number still counts toward the school’s absenteeism rate.

It was a different story on the elementary level. Schools met or surpassed the state standards across the board. Bacon District Elementary, for example, had one of the highest pass rates in the district and in the state when it comes to math. A total of 96% of Bacon students either passed or showed significant improvement in their math test. It continues a steady progression, improving on 89% in 2019 and 83% in 2018. The story was the same for Bacon’s English rates as well, with 87% passing. That’s an improvement from 84% in 2019 and 76% in 2018.

Math was also a highlight for Eureka Elementary. Eureka came within 1% of Bacon, with 95% of students passing or showing significant improvement. It’s been a constant for the school, as 95% of Eureka students passed math in 2019 as well. The numbers were just slightly lower for English, with 89% passing.

And finally, there’s Phenix Elementary, which also had pass rates above 90% for math. A total of 91% of Phenix students passed their math test, with 84% passing English.

“The hard work by our school staff and students, coupled with working smart through the use of student data, resulted in CCPS having results of which we are extremely proud,” Mason said. “Our students are excellent, our parents are supportive and our staff goes the extra mile to ensure student success.”