Does Charlotte County need a new law for Amish buggies? 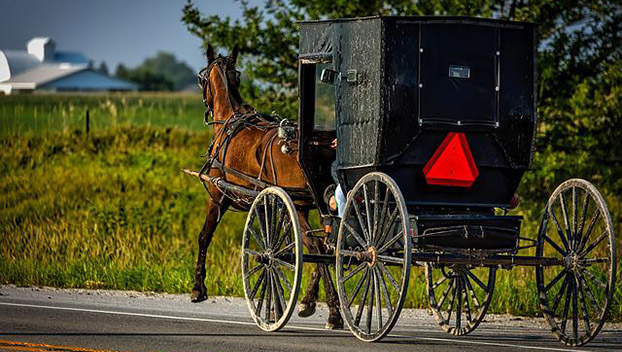 In October 2021, a pickup truck hit an Amish buggy in Cumberland County, killing two parents and injuring their eight kids. In September 2020, an Amish buggy pulling a wagon was hit from behind by a car in Buckingham County. Fifteen people, ranging in age from 35 to 5 months, were injured.

In each case, the horse-drawn buggy had everything required. There was a “slow moving vehicle” sign. The buggy had working headlights and taillights. The problem, however, involved the other drivers. That’s an ongoing issue. The question is, in the post-pandemic world, what to do about it.

A Change For Charlotte?

Currently in Charlotte County, it’s not a requirement for Amish buggies to always have flashing lights on. But that could change.

“Some of my board members have expressed concerns about what can be done to make it safer for the Amish in Charlotte County,” said Daniel Witt, Charlotte County administrator. “VDOT has placed signage along the major routes used by the Amish to remind motorists to be cautious and share the road.”

Witt said, as county supervisors have raised questions about the possibility.

“Currently, it seems most only use those after dark,” Witt said. “But that would require VDOT and the legislature to make a new law. It cannot be done by local ordinance.”

But on the other hand, Witt pointed out that there’s been no complaints from the Amish community in Charlotte County. None of them have expressed concern about road trael.

A problem with Amish buggies

But what about the rest of this region? How are they handling the issue?

In 2019, Bobby Jones, then serving as Buckingham County District 1 supervisor, noticed an increasing number of buggy-related accidents in the area. Jones, who passed on in 2020, notified the county’s chief of emergency services, asking him to look into it.

That started what eventually became the Amish Safety Improvement Committee. But as the group started coming together, COVID-19 put it on the back burner. Now, in a post-pandemic world, the project is really just getting started.

“Our work is pretty infantile and just getting started, but we just haven’t had the opportunity to get out there as much as we will,” said Davis. “I think the potential is there for us to make a large difference.”

What is the Amish Safety Committee?

The goal here is to decrease the number of accidents and generally raise awareness, letting people know Buckingham has Amish residents and to expect to encounter their buggies on the roads.

Davis was appointed chair of the committee by Jones and soon after they began to host meetings regularly. On the committee there are representatives from the state police, sheriff’s office, the Amish community, and Virginia Department of Transportation (VDOT).

A big issue is distracted driving but when a non-motorized vehicle comes into play it increases the danger level due to the speed difference, according to Davis. A horse drawn buggy goes one tenth the speed of a motor vehicle.

“Typically distracted driving is a bad thing,” said Davis. “It becomes very bad when the vehicle in front of you is an Amish horse and buggy because your reaction time is decreased.”

The main course of action for the committee is prioritizing education, according to Davis. It was not their intention to become regulatory or make new laws. The committee also focused on raising awareness of the situation and presence of the Amish community and the roadway hazards they present.

VDOT has increased the amount of signage in Buckingham to increase awareness of horse and buggy driving areas, according to Davis. They are at every entryway into the county and all the main intersections.

“VDOT has continuously worked with the Amish communities as well as local and other state partners to reduce crashes,” stated Acting Director of Communications at VDOT Marshall Herman in an email.

Signs were placed to better warn motorists to anticipate horse-buggy vehicles, according to Herman. In some counties, signs are also posted in conjunction with “Countywide” and/or “Share the Road” plaques at major road entrances.

The committee also decided to make roadway safety a bigger priority for all.

“We also decided to do more than just talk about honest safety and we ended up doing a complete share the road campaign,” said Davis.

The biggest accomplishments of the committee are internally creating rules and regulations, according to Davis. They have also made a promise to put a flashing light on the rear of all buggies that enter roadways.

“I would say we’ve already made a decent impact and quite a bit more to come,” said Davis